Strong week has #14 Terps on top of ACC:

A young Maryland side has had its share of ups and downs so far this season, but is currently bucking the odds to sit atop the ACC.

The Terps held secured that status after a two-game swing to North Carolina saw them come away unbeaten against some pretty formidable opposition in #6 Duke and #7 Wake Forest.

After tying 2-2 against Duke last Thursday, the Terps secured their biggest win of the season to date, defeating the Demon Deacons 2-1 on the road. The experienced tandem of Hayley Brock and Becky Kaplan powered the Terps again, as each tallied in the win

Kaplan and Brock have combined for 15 goals so far on the season to lead the Terps, as they’ll face another daunting ACC opponent when they host Virginia on Thursday.

Since losing 6-0 on the road against Stanford, #11 Georgetown has scored 14 times in its last four games without conceding a single goal – all against conference opponents – to maintain a four-game winning streak. 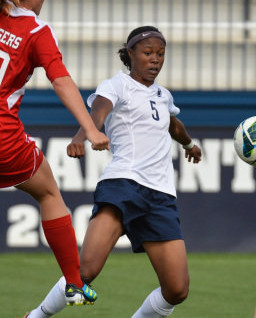 Over the past weekend, this time it was a 4-0 win over Connecticut as Daphne Corboz scored a brace, then followed that up with a 1-0 defeat of Providence.

"I knew it was going to be a tough game," Head Coach Dave Nolan said after the win over Providence. "They (Providence) had a disappointing performance against Villanova on Friday and we had been very good and sometimes on the second game of a weekend, you get the opposite from Friday. They were going to come out fired up and were excited to play us because we're having a good season. I felt it was important to get out to a good start and deflate them a bit, but we never did.

"We got a goal and had some chances through play early, but I didn't feel that we played as good as we've played earlier in the season. At 1-0, it's always going to be nervy and anything can happen so I was happy to get the win."

Life with U20 WNT forward Maya Hayes is just that much better for the Nittany Lions.

It’s been only three games thus far with the junior attacker back in the lineup after her World Cup experience, but she’s already scored four times, including three over the two games over the past weekend.

After scoring a brace against Northwestern in a 4-1 win – Christine Nairn scored the other two goals on the day – Hayes added another tally in a 4-0 win over Illinois as Penn State extended its Big Ten record to an impressive 3-0-0.

No problems for #32 Michigan on the road:

It’s been a continued resurgence for the Wolverines so far this year, and a two-game road swing couldn’t halt the momentum built up by head coach Greg Ryan’s side.

After opening the road trip with a 1-0 defeat of Minnesota, the Wolverines took down #34 Wisconsin to maintain their unbeaten record in the Big Ten at this point of the season.

"We had a great tactical plan in terms of facing Wisconsin,” Ryan said in a press release. “They are a very skillful, talented attacking team. I felt our ability to counter that kind of an opponent would create a lot of chances, but I didn't know we'd get as many as we got. Our goals were very similar, counter-attacked right down the middle of the field. That was the plan. I have to give credit to our players. Their execution and tactical awareness were great for a young group. It's more like what you see with professionals."

Junior forward Nkem Ezurike continues to be a difference maker for Michigan after missing the first four games of the season at the U20 Women’s World Cup, scoring twice against Wisconsin to take her team-leading tally to 5 for the season.

More importantly, the Wolverines defense has been incredibly stout, as they haven’t conceded a goal in their last fives games.

There have been bumps along the way for a young but potent #11 Notre Dame side.

However, right now, head coach Randy Waldrum appears to have his team headed in the right direction, as they are currently riding a four-game winning streak ahead of a Northeast road swing this upcoming weekend.

The Irish bested Big East foes Pittsburgh 2-1 on Friday, before easing past Oakland 3-0, with U20 forward Cari Roccaro getting a goal and an assist in the Sunday win.

"This was a good weekend for us again," Waldrum said in a release. "Last weekend, I thought we put together a good Sunday game together (against Cincinnati). Today was a little bit of a slow start, but overall, I'm pretty pleased with the performance for a Sunday game. It's so difficult to play Friday and then turn around and play Sunday, but I thought the kids did well with it and were pretty well organized.”

Keeping the wins rolling on the road is going to be critical for the Irish as they continue to improve on the season.