There are few better ways to prepare for the NCAA Tournament than winning the ACC version the weekend before.

That’s what Virginia accomplished on Sunday, taking the conference tournament by the scruff of the neck, capturing the prestigious crown with a 4-0 win against Maryland.

"I'm so happy for his team," head coach Steve Swanson said in a release. "We've improved steadily as the year has gone by and we've become a better and better team. Not only am I happy about the result, that we can call ourselves ACC Champions, but we played some great soccer this weekend as well."

Prior to Sunday’s final, Virginia got the better of a normally stout Florida State defense, scoring twice in the early going to hold on for a 4-2 win in the tournament semifinals. 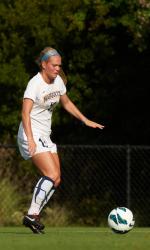 The achievement crowns what has been quite an odd but successful year for the Cavaliers – Swanson was absent for the first eight games of the season because of head coaching duties with the U20 women’s national team. Also missing that same stretch was midfielder Morgan Brian, and the Cavaliers were up and down at times.

But the team, and specifically the sophomore Brian, came to life over the weekend in Cary, North Carolina, as the dynamic player had a hand in five goals (scoring three and adding two assists) in the two wins.

The accomplishment not only seals UVA’s place as one of the favorites for the upcoming NCAA Tournament, but also earned them a #2 seed in the field.

The New Jersey school wrapped up its impressive season with a big 4-2 win against rivals Penn to complete the run of form. A hat trick from Lauren Lazo paved the way for the win and the achievement.

"To go 7-0 is really special,” head coach Julie Shackford said in a release. “We lost three or four starters (to injury) throughout the year and the team, I felt like, did a phenomenal job absorbing all that. It seemed like when one went down, there was somebody there to step in and do just as well. It's a well-led team with eight seniors. I think they're the ones who really put things in place for us to have a good season and did a great job with our team culture.”

It seemed inevitable for Sunday’s Big East championship between Marquette and Georgetown to be a tight, defensive battle, and the 1-0 win for the Golden Eagles delivered.

Both teams had their chances, but Taylor Madigan bagged the game winner with less than five minutes to go to secure the postseason trumph for the Big East power.

"Both teams had chances and I don't know if you could have drawn it up any better,” Marquette head coach Markus Roeders said in a release. “For Taylor to come through for us and score a goal was great. It allowed us to lift a trophy today. This is a huge day for the program and Marquette and everyone involved. This really was a culmination of everything that we have been working for as a program."

After a strong finish to the regular season, the Ohio State Buckeyes continued to roll in the Big Ten conference tournament, securing the title on Sunday with a 2-1 win against Illinois.

"We had a very difficult start to the season losing our first two games on the road, but we vowed to get better every single game and every single week in training and it has showed as this team has come so far," head coach Lord Walker said in a press release. "To play three games in five days is just really grueling and I'm very pleased with our performance."

With three wins in the conference tournament, Ohio State extended their winning streak to nine games overall ahead of an opening NCAA tournament matchup against Oakland.