Women's Team of the Week: April 13 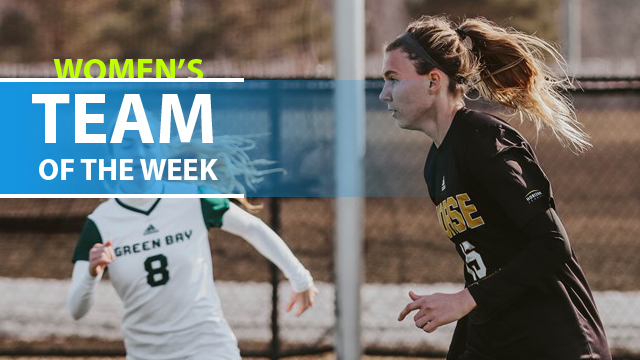 It’s win or go home time for many teams in Women’s Division I soccer.

Northern Kentucky senior midfielder Kailey Ivins ensured her side would play for a spot in the NCAA tournament.

Ivins scored a goal and had two assists in Sunday’s 3-0 win against UIC, securing the latest Women’s Player of the Week nod. One week of regular season and conference games remain until next week’s Selection Show for the NCAA Tournament.

She also scored last Monday in the regular season finale, a 2-0 victory against Wright State. Check out some of the other top performances from the past week of action in DI women’s soccer.

GK Kenna Caldwell, Texas A&M – Three saves from Caldwell secured a shutout for Texas A&M in a Top 10 win against TCU. The Aggies became the first team to defeat the Horned Frogs during the 2020-21 season.

M Delanie Sheehan, UCLA – One of UCLA’s senior stars scored the winning goal at Stanford, securing the first win for the Bruins against the Cardinal since 2014. The Bruins returned home from a trip to Northern California with a Pac-12 championship, beating Stanford and Cal.

M Croix Bethune, USC – Three goals and an assist from Bethune led USC to a 5-0 win against California. The Women of Troy came away from a trip to Northern California with a win and a draw versus Stanford.

M Lucy Porter, Hofstra – Another game, another prolific performance from Hofstra. Porter was once again involved in several goals, scoring a hat trick in a 7-2 win over Towson.

F Cameron Tucker, BYU – A goal and assist from Tucker led BYU to an important 2-1 win against Pepperdine, as the two teams jostle for second place in the WCC.

F Marcy Barberic, Buffalo – Few players in the country are as in form as Barberic at the moment. She has five goals in the last three games, including three in the past two. Most importantly, Barberic tallied the winner in the MAC tournament to help Buffalo advance.