Women’s Team of the Week: April 6 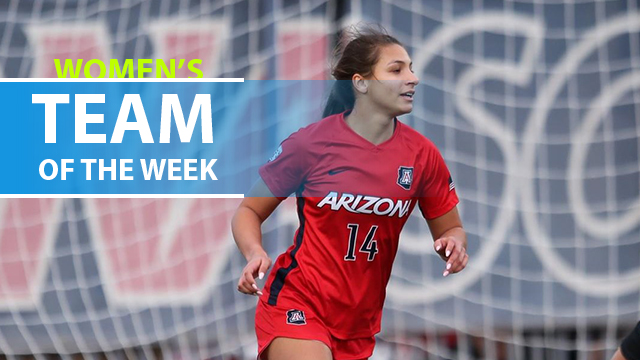 With a shortened spring season for most programs, even a short winning streak can make the difference in making the small tournament field.

Jill Aguilera’s goal contribution could prove to be decisive in Arizona’s quest to make the postseason. The forward scored a pair of goals in a 2-1 win over Stanford, and then setup the winner against California in a 1-0 victory on Sunday. The pair of wins could put the Wildcats on the pathway to an at-large bid.

Check out some of the other top performances from the last week of action in women’s DI soccer.

GK Emily Alvarado, TCU – While the night belonged to the TCU attack, Alvarado still had a good game in goal for the Horned Frogs. She made six saves as her team scored three first-half goals on the way to a 4-0 win.

D Karina Rodriguez, UCLA – The Bruins welcomed the Washington schools to Westwood, and picked up two wins and two shutouts. Rodriguez played 90 minutes in both games, grabbing the winning goal against Washington on Sunday. UCLA sits in first with three big tests left on the schedule.

D Kylie Gazza, Samford – Samford continues to dominate the Southern Conference, winning the regular season title thanks to two wins last week. Gazza scored the winner on Sunday against UNC Greensboro, her second of the week after she tallied the insurance goal at VMI. She also went the full 90 and helped her side secure two shutouts.

D Sarah Houchin, Auburn – Facing a talented South Alabama attack, Houchin helped the Tigers secure a shutout in a 3-0 win. She also contributed an assist on one of the goals.

M Isabella Sibley, West Virginia – Sibley scored the winning goal in a tightly-contested 1-0 win for the Mountaineers in Morgantown.

M Julia Grosso, Texas – The Canadian star scored a goal and had two assists as Texas cruised in a non-conference matchup against Baylor, a 4-0 win for the Longhorns.

M Frankie Tagliaferri, Penn State – It’s been quite the senior spring season for Tagliaferri, who was involved in all six of Penn State’s goals against Maryland. She had two tallies and four assists in a 6-0 win. In just 11 games, she has six goals and nine assists.

F Jill Aguilera, Arizona – The final push for the Wildcats in Pac-12 play will be critical. They have Colorado, Utah and Arizona State left.

F Penelope Hocking, USC – Three goals and an assist from Hocking propelled USC to a 5-0 win against Washington on Friday.

F Sam Gerhart, High Point – Two games are left in High Point’s Big South schedule, looking to run the table in the conference and overall. Gerhart jump-started a comeback last week against Presbyterian. Down a goal, she scored twice to put High Point in front and then assisted on the final goal in a 3-1 win.