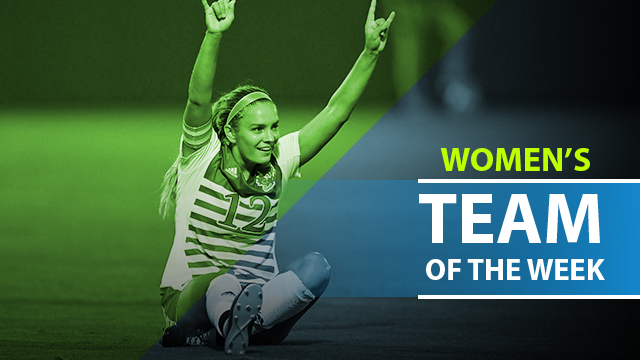 Even wins at this stage of the season can be crucial.

The opening week of the women’s Division I season has come and gone, with plenty to glean from the opening round of action.

While upsets were few and far between, Kansas found a way to edge past Pepperdine on Friday night, perhaps the most surprising results of the opening few days. Katie McClure, the first TDS Player of the Week, had a big role in that.

McClure secured the winner in the 1-0 victory against Pepperdine and followed that up with another goal and assist to wrap up the week.

Check out the complete list of honorees below. Please send future recommendations to editor@topdrawersoccer.com.

GK Imani McDonald, Long Beach State – While Friday night’s opener ended in heartbreak when UCLA scored with two seconds left, McDonald’s seven saves on the night kept Beach in it until then. She followed that up with five more saves on Sunday, as the team bounced back to defeat SMU by a 1-0 score.

D Kaleigh Riehl, Penn State – The Nittany Lions blanked West Virginia by a 1-0 score to open the weekend, holding on for the win Friday night. Riehl’s leadership and ability at the back highlighted that, and she logged 70 minutes in a 6-0 blowout win on Sunday.

D Phoebe McClernon, Virginia – One of college soccer’s best center backs was in solid form as Virginia won both of its games at home last week. She logged all but 11 minutes in two matches, wins over Colgate and Cincinnati.

D MA Vignola, Tennessee – The wingback not only helped Tennessee snap up a pair of shutouts, but she scored a goal against St. John’s and handed out a pair of assists in a 4-0 victory against George Mason on Sunday.

D Julia Ashley, North Carolina – Arguably one of UNC’s most important players, Ashley played every minute in wins against Illinois and Ohio State last week. She also notched an assist when her teasing cross was headed home by freshman Rachael Dorwart in Thursday’s 3-1 defeat of Illinois.

M Brianne Folds, Auburn – A big question heading into the season for Auburn is who leads the team in the goal-scoring department. Folds put her hand up over the weekend, scoring twice in a 4-0 win over Samford and then assisting on the game-winning goal in Sunday’s defeat of South Florida.

M Cassidy Lindley, Florida – It didn’t take long for the freshman to leave her mark in college soccer, setting up Florida’s first goal of the season in Friday’s opener against Washington. She also scored and had two more assists, earning the start and accounting for the game-winning goal in Sunday’s 4-2 victory against Florida Atlantic.

M Gaby Carreiro, Boston College – Carreiro missed the 2017 season due to injury and made a big impact in her return. She scored twice and added an assist in a 4-2 win over Quinnipiac in the season opener. In Sunday’s 1-0 win over Northeastern, she played 84 minutes helping lock the midfield down for the victory.

F Katie McClure, Kansas – After scoring the game-winning goal in a season-opening 1-0 win over Pepperdine, McClure notched a goal and an assist in Sunday’ 3-0 defeat of South Dakota State. Her role in both wins earned her the Player of the Week nod.

F CeCe Kizer, Mississippi – The senior star opened up the weekend with a four-goal effort, as Ole Miss put 10 past their first two opponents of the season. She also added an assist.