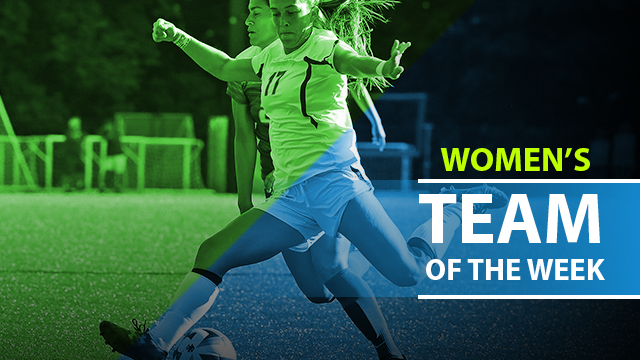 Goal galore over the past week of women’s Division I soccer dominate the latest Team of the Week.

While there were a handful of notable defensive performance, goal-scorers in Florida, California and Massachusetts dominated.

Previous Teams of the Week: Aug. 27

Few players excelled quite like Boston College midfielder Sam Coffey. A member of the U.S. Under-20 player pool, Coffey scored three goals and added three assists last week, as the ACC side picked up wins over Connecticut and Albany.

There were plenty other impressive offensive performances that joined Coffey last week. Check out some of them below. Don’t forget to send in Team of the Week submissions every Monday to college@topdrawersoccer.com.

GK Teagan Micah, UCLA – The Australian made five saves, including a spectacular second-half stop to keep scores level at 1-1. That allowed UCLA to pick up the road win with Delanie Sheehan’s goal.

D Hannah Webb, Oklahoma State – Only a sophomore, the defender played all but eight minutes of Oklahoma State’s wins over Lamar and Florida, helping the team keep a clean sheet in both games.

D Grace Hancock, Washington State – Heading on the road for the weekend, Hancock played the full 90 at the back to help the Cougars to a solid 2-0 road victory over Minnesota.

M Sam Coffey, Boston College – Coffey scored a goal and had three assists in a win against Albany and followed that up with two goals against UConn. It was a banner performance and perhaps a sign of things to come from the Eagles.

M Savannah DeMelo, USC – Back in the mix after her stint with the U.S. Under-20 Women’s National Team, DeMelo scored twice and had three assists as USC roared past Cal Poly and Pepperdine.

M Brianne Folds, Auburn – Another hugely impressive offensive performance from Folds keyed Auburn to another pair of wins. She had a goal and four assists in wins over UAB and Louisiana-Lafayette, as the SEC side rolled to a 4-0 record on the season.

F Paige Monaghan, Butler – A massive performance from Monaghan and her Butler squad at home led the Big East side to a 4-1 win against Notre Dame. She scored twice and added an assist in the victory.

F Evelyne Viens, South Florida – The Canadian attacker had a hand in all three goals, leading South Florida to a 3-1 victory against Baylor on Friday night. She assisted the first two strikes before finding the back of the net on her own.

F Mimi Asom, Princeton – On the road for a pair of opening games, the Tigers won on the back of a pair of game-winning goals scored by Asom. The senior striker bagged the decisive strikes against New Hampshire and Boston University.

F Marjorie Boilesen, Florida Gulf Coast(w) – The FCGU star scored and assisted in her side’s 4-2 win against Alabama, the program’s first-ever win against an SEC side.

F Brooklynn Rivers, Louisville – The ACC side’s strong start to 2018 continued over the weekend with a pair of wins on the road. Rivers scored a hat trick in Sunday’s 3-1 win against Michigan.