Women's Team of the Week: March 9 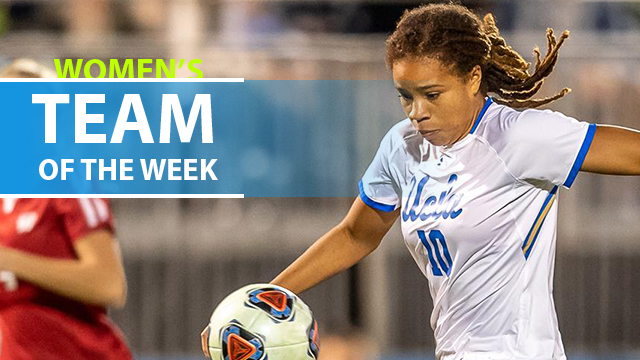 So far, so good for UCLA in the spring season.

The Bruins extended their wins streak to six at the start of the campaign, picking up a pair of home wins against the improving Oregon schools. And it was the latest TDS Player of the Week that made the difference.

Mia Fishel provided game-winning moments for UCLA as the Bruins defeated Oregon and Oregon State on Friday and Sunday respectively.

In Friday’s 3-0 win against the Ducks, Fishel scored a goal and added an assist to put the game away in the second half. Against Oregon State, she opened the scoring on a pass from Marley Canales. After the game was tied and went to overtime, Fishel won a penalty that Canales converted to win the game.

Check out some of the other top performances from women’s Division I soccer below.

GK Jordyn Bloomer, Wisconsin – Bloomer bagged a pair of shutouts, making five saves in a 1-0 win against Michigan last Tuesday. On Sunday, she made one stop in a win against Illinois.

D Julia Leas, Georgetown – Starting every game as a freshman in 2019, Leas has picked up where she left off at the start of the spring campaign. Last week, she anchored a pair of Big East wins against Seton Hall (4-0) and Providence (1-0). The Virginia native scored the winning goal in the defeat of the Friars to go with helping the Hoyas secure a pair of shutouts.

D Tianna Harris, Kent State – Two games, two clean sheets for Kent State in their opening week of MAC player. Harris logged the full 90 in both games, helping her side to a pair of 1-0 victories.

D Chyanne Dennis, South Florida – A stifling defensive effort from the USF back line anchored her side’s American Athletic Conference win against East Carolina. Dennis and the Bulls defense conceded just one shot on goal in the 1-0 victory.

D Jyllissa Harris, South Carolina – Deployed in central defense instead of her usual midfield spot, Harris helped the Gamecocks keep a clean sheet and tallied a goal in a 3-0 victory against the College of Charleston.

M Sabrina Bryan, Hofstra – The Pride attack is dominating the early stretches of the season, continuing in a 4-0 win against Albany last week. Bryan scored a goal, added two assists from her left midfield spot.

M Allison Leonard, Butler – It was a strong shift for the freshman last week, as Butler made it a perfect 4-0 start to the season. She scored twice, including the winning strike in a 3-1 victory against DePaul.

M Grace Yochum, Oklahoma State – In a season with minimal big non-conference matches, last week’s battle between the Cowgirls and Saint Louis was a notable one. Yochum bagged the winning goal, created two chances and won 63% of her challenges.

F Zsani Kajan, St. John's – The Red Storm is rolling, with five wins in five games ahead of this weekend’s clash against Georgetown. Kajan had a hand in both winning goals over the past week, as the Hungarian assisted on the overtime strike by Frederique St. Jean in a 1-0 defeat of Villanova, then scored the winner herself over the weekend against Seton Hall.

F Mia Fishel, UCLA – There’s been no drop off to Fishel’s game in the current season, as she’s scored four goals in six games as UCLA is off to a perfect 6-0 start.

F Frankie Tagliaferri, Penn State – After a strong Big Ten performance in 2019, the senior stepped up over the past week with goals against Indiana and Michigan State. That’s made it three from the past three games as the Nittany Lions have quickly put the opening day loss to Rutgers behind them with four straight wins.