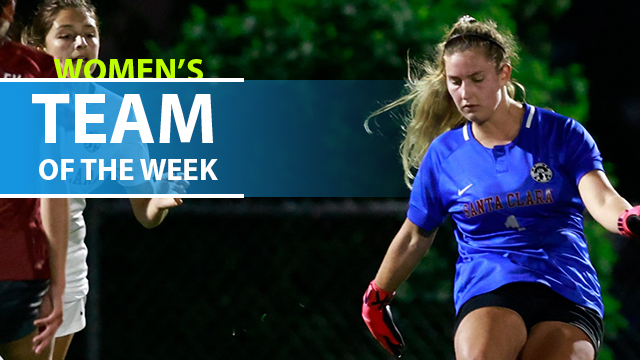 The final Team of the Week for the spring season is here, highlighted by perhaps the most surprisingly team in the women’s College Cup.

While Santa Clara was a seeded side, the Broncos had to secure wins against a higher rated side in the form of Arkansas in the third round. And while Clemson represented the challenge in the quarterfinals, goalkeeper Marlee Nicolos still had to have big performances in both. The shot-stopper captures the final Player of the Week nod for the 2020-21 season.

After making four saves to keep a zero against Arkansas, Nicolos made six saves against Clemson on Sunday to secure progress.

Check out some of the other top performances from the past week of action in the women’s DI tournament.

GK Marlee Nicolos, Santa Clara – After back-to-back standout efforts in the third round and quarterfinals, the redshirt freshman will look to make it three straight great performances in a matchup against North Carolina.

D Gabby Carle, Florida State – The Canadian international scored and setup another goal in last week’s defeat of Penn State in the third round. She then helped her side grab a shutout and converted her spot kick in the 5-3 shootout win versus Duke.

D Lauren Flynn, Florida State – Slotting in the FSU back line for both games, Flynn completed 97% of her passes against Penn State. She also played every minute and marshalled the back line in the draw versus Duke.

D Talia DellaPeruta, North Carolina – Another impressive freshman playing at the back, DellaPeruta logged 90 minutes in the two 1-0 wins over Texas A&M and Washington.

M Taryn Torres, Virginia – The midfielder’s return to fitness has been a big part of her team’s run in the tournament. Torres had an assist against Rice and helped her side edge TCU by a 1-0 score. In the game against Rice, Torres completed an impressive 97% of 92 pass attempts.

M Clara Robbins, Florida State – Robbins scored what turned out to be the game-winning goal against Penn State, off an assist by Carle. She also played 82 minutes in the quarterfinal against Duke, getting three shots on goal.

M Lia Godfrey, Virginia – Yet another talented freshman making a big impact, Godfrey was solid against Rice. She created a pair of chances and had three shots in the Third Round, while her corner kick setup the winning goal in the quarterfinals.

F Julie Doyle, Santa Clara – Two assists by Doyle helped her side advance past the Razorbacks in the Third-Round game.

F Diana Ordonez, Virginia – A hat trick in the third round versus Rice punched Virginia’s tickets to the quarterfinals. Ordonez had three shots in the 1-0 win over TCU.