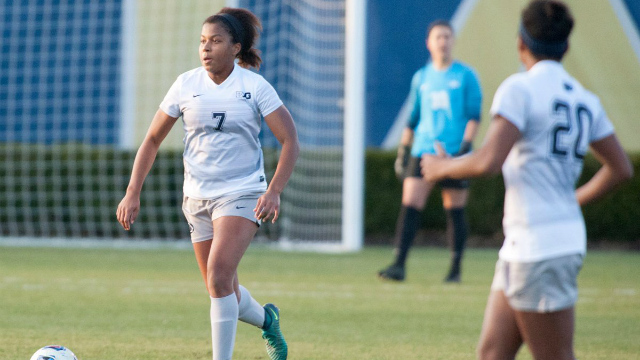 It’s crunch time in the women’s DI NCAA tournament, with the penultimate Team of the Week dropping.

The individuals that helped to engineer the eight teams still dancing show up as the latest honorees, with a senior from the Big Ten leading the charge.

Playing on the road against West Virginia, Penn State center back ensured that the Nittany Lions would get at least one more game. After helping blank Wake Forest on Friday night, Ball led Penn State’s come-back win in Morgantown. She scored the game-winning goal and setup the insurance tally as the Big Ten tourney champs advanced.

Check out the rest of the Team of the Week below.

GK Jennifer Wandt, Baylor – The freshman goalkeeper’s star turn came on Friday, as she made seven saves to keep the second-round close with USC. That allowed Baylor to tie the game with just 16 seconds remaining. She made two saves in the penalty shootout, and then a single save in Sunday’s 3-2 win over Notre Dame.

D Elizabeth Ball, Penn State – With two more games under her belt, the TDS Player of the Week is now fifth in minutes played with 7,701. She’ll look to lead the Nittany Lions to a famous win on the road against Stanford.

D Jackie Schaefer, South Carolina – Only a freshman Schaefer continued to excel with South Carolina's stingy back line. She logged the full 90 minutes in the second and third round, both 1-0 wins.

D Tierna Davidson, Stanford – Davidson's full-length of the field run on the ball finally opened up the Florida State defense, setting up Jordan DiBiasi's game winner in the 79th minute. Her stellar play at the back kept cleant sheets against the Seminoles and Auburn in the second round.

M Taylor Racioppi, Duke – It was a dominant weekend for Duke against Big 12 opposition, as Racioppi scored two goals and added an assist in massive wins over Oklahoma State and Texas.

M Anika Rodriguez, UCLA – Scored the game-winning goals against Northwestern and Virgina as the Bruins found a way to survive and advance Rodriguez has continued to play well in the tournament for UCLA, scoring three goals in three games so far..

M Alina Ortega Jurado, Penn State – Goal-scorers continue to emerge at just the right time for the Nittany Lions. Ortega-Jurado scored the winning goal in Friday’s second round matchup against Wake Forest, and tied the game in Sunday’s come-from-behind win over West Virginia.

F Deanne Rose, Florida – Given the lack of success at home in previous NCAA Tournaments, Florida looked nervous as the game ticked on against Washington State. But the Canadian international helped deliver, as her well-timed run and finish in the second overtime won the game.

F Abby Givens, Princeton – Givens was first to a ball over the top, beating Samantha Leshnak and just getting enough to poke home the game-winning goal in Princeton’s 2-1 win at North Carolina.

F Ashley Sanchez, UCLA – Beautiful passes from Sanchez unlocked Rodriguez for her goals, as the freshman continues to enjoy a dynamite first season in college soccer.

F Lauren Piercy, Baylor – Providing a spark from the substitute’s bench, Piercy had a hand in all three Baylor goals in Sunday’s 3-2 win against Notre Dame. Baylor will make its first NCAA quarterfinal appearance against Duke later this week.