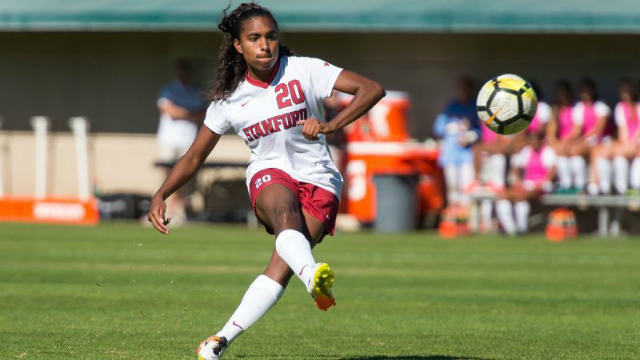 Stanford, Duke, South Carolina and UCLA secured quarterfinal wins in the wake of Thanksgiving to advance to this weekend’s College Cup in Orlando, Florida.

A freshman played a pivotal role in one team’s success, earning Player of the Week honors. Stanford star Catarina Macario is starting to build a case for Player of the Year, after scoring one and setting up another in the Cardinal’s 4-0 romp against Penn State in Palo Alto.

The imperious striker is one of many talented players in Stanford’s arsenal, and is a big reason why the Pac-12 powerhouse enters the College Cup as clear favorites.

See who joins Macario in the final Team of the Week for the 2017 women's college season.

GK Natalie Grossi, Princeton – While the Tigers goalkeeper did give up three goals in a 3-1 loss to UCLA, Grossi kept the game close. She made 11 saves that ensured the quarterfinal didn’t get more lopsided, and hope for Princeton when they made it 2-1 early in the second half.

D Chelsea Burns, Duke – The Blue Devil back line was in imperious form, as Baylor had more fouls (17) than shots (11) in the quarterfinal matchup in Durham. Burns played 90 minutes, contributing to the clean sheet and provided and assist on the second goal.

D MacKenzie Cerda, UCLA – All season, Cerda’s forays forward have been a huge part of UCLA’s offensive success. Her cross found the header for Hailie Mace’s first of the evening, and she offered plenty on both sides of the ball.

D Grace Fisk, South Carolina – The transfer addition has been a huge hit this season for the Gamecocks. The SEC Defender of the Year scored the winning goal against rivals Florida, as South Carolina secured its first-ever College Cup spot.

M Jaye Boissiere, Stanford – With Tierna Davidson slotting into central defense, Boissiere’s impressive job in the midfield picked up the slack. She also contributed on the score

M Lindsey Lane, South Carolina – Ensuring that the Gamecocks would seize the chance to make it to the College Cup, Lane’s corner kick found the head of Fisk for a scrappy opener against Florida. Her finish from range put the game out of the reach late in the second half.

M Olivia Athens, UCLA – The freshman capped off a sensational team move for the second goal, which proved to be the game winner against Princeton. It was Athens’ first goal of the 2017 season.

M Ella Stevens, Duke – Duke’s plethora of attacking talent came to the fore against Baylor, as the Blue Devils steam-rolled past its third Big 12 opponent. Stevens provided the goal of the game with a nice back-heeled finish to make it a 2-0.

F Catarina Macario, Stanford – Now on 17 goals and 13 assists on the season, Macario’s put together one of the best freshman season’s in the history of college soccer. The forward could even make a case to be not just the Freshman of the Year, but DI’s Player of the Year.

F Hailie Mace, UCLA – Mace got back into the scoring action, finding the back of the net twice against Princeton. The goals were her first in more than a month, and the forward needs to be on song in Friday’s semifinal against Duke.

F Imani Dorsey, Duke – Dorsey was right in the thick of Duke’s two-goal surge in the early minutes of the second half that put the game out of reach. She kept the play alive, finding Stevens in front of goal for the ACC side’s second, and then added a third of her own almost two minutes later.