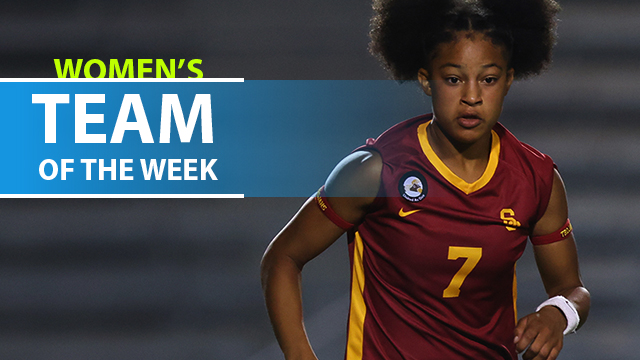 At the business end of the season, USC’s Croix Bethune is in great form at just the right time.

Needing to win a pair of home games last week against California and Stanford to maintain control of their own destiny in the Pac-12 race, Bethune had a massive week.

The talented midfielder is the latest Player of the Week after scoring the winning goal in a 2-0 defeat of California, and then inspiring a come-from-behind victory over Stanford. Bethune scored twice and added an assist as USC turned a 2-0 deficit into a 3-2 win on Sunday, holding on to first place in the conference.

@CroixBethune wins it for USC with the Golden Goal!!

Check out some of the other top performances from the past week of action in Division I women’s soccer.

D Lilly Reale, UCLA – The freshman center back continues to excel at the back for the Bruins. She played every minute of a pair of crucial 1-0 wins against Stanford and California over the past week.

D Maddy Chavez, UC Irvine – With a pair of shutout wins, UC Irvine earned a share of the Big West regular season title. Chavez played 90 minutes at the back in both games, in a 1-0 win against UC Santa Barbara and a 2-0 defeat of Cal Poly on Sunday.

D Kara Mills, UNC Wilmington – Despite playing just 14 minutes, Mills provided the title-winning goal for UNC Wilmington, as her strike secure a 1-0 win against Towson on Sunday. UNCW earned the No. 1 seed in the CAA tournament after winning three games to finish the season.

M Dani Babb, Grand Canyon – Babb brought it from the bench for Grand Canyon, which won the WAC West Division title with two wins last week. She scored and assisted against Dixie State, and then added a brace and another helper in a 6-2 defeat of Utah Valley.

M Croix Bethune, USC – The midfield talent is in the middle of a breakout season, sitting on 13 goals and 7 assists after last week’s output. She’s going to be massive in Friday’s Pac-12 decider against UCLA.

M Tinaya Alexander, LSU – Two massive goals from Alexander helped LSU pick up a 4-2 upset win against Arkansas. It has the potential to earn LSU an at-large bid next week. Alexander also played in a 0-0 draw in Sunday’s SEC tournament matchup, where they advanced on penalty kicks.

F Trinity Byars, Texas – A huge weekend from Byars has Texas in the Big 12 conference tournament semifinals. She scored in the 2-0 regular season win against Kansas, and then dominated on Sunday against Oklahoma. Byars had a hat trick and assisted on another goal in a 5-2 victory.

F Molly Grant, Lipscomb – The Bison attack dominated a pair of ASUN opponents last week in the first two rounds of the conference tournament. Grant scored once and had two assists in a 6-0 win over Jacksonville State. She also scored two times in a 4-0 defeat of Eastern Kentucky. Lipscomb is in the ASUN final against Kennesaw State, the sixth appearance in seven years.

F Ava Seelenfreund, Brown – The junior scored the decisive goal against Penn that clinched the Ivy League for the Bears. She has five goals in the six Ivy League matches.

F Caroline Conti, Clemson – With a pair of wins, Clemson finds itself in the ACC tournament semifinals. Conti scored twice and had an assist in Thursday’s regular-season finale against Boston College. That secured a spot in the tournament quarterfinal on Sunday, where she scored again as the Tigers defeated Notre Dame by a 3-2 score.