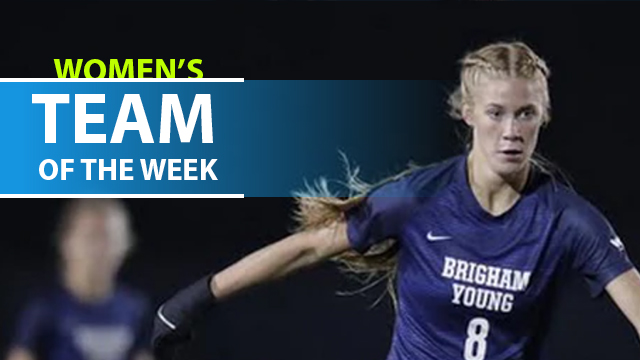 The final women’s Team of the Week is headlined by one of the best players in college soccer over the past couple of years.

A vintage attacking performance from Mikayla Colohan, playing the final home game of her career in Provo, led the Cougars to a first-ever College Cup appearances. The attacking midfielder scored twice and setup another goal, paving the way to an exciting 4-1 win against South Carolina. BYU lines up against WCC rivals Santa Clara in Friday’s national semifinal, as a huge challenge looms for both sides.

Check out some of the other top performances from the weekend’s action in the NCAA Tournament.

GK Meagan McClelland, Rutgers – McClelland converted a penalty kick and stopped one to help Rutgers win a second shootout in a row. She also made big stops in the second half with the game tied at 2-2.

D Emily Madril, Florida State – The FSU back line is peaking at the right time, limiting Michigan to just two chances and 0.72 Expected Goals, as measured by InStat. Madril also completed 86% of her pass attempts.

D Lauren Flynn, Florida State – Flynn served as the other half of the center back pairing in the 1-0 win against Michigan. FSU’s defense is peaking at the right time, with back-to-back 1-0 wins to progress to California.

D Alexis Loera, Santa Clara – A 2-1 win at Durham secures a home College Cup for the Broncos. Loera played every minute of the victory, limiting Duke to just 0.72 Expected Goals.

M Mikayla Colohan, BYU – Now at 18 goals and 15 assists, Colohan’s capping off her tremendous production in college with arguably her best season.

M Avery Kalitta, Michigan – The freshman was impressive in midfield, even in defeat. She won 74% of 27 defensive challenges, helping keep things extremely tight.

M Brecken Mozingo, BYU – While Colohan was excellent spearheading the attack, she had several teammates chip in. Mozingo had an assist on one of the four BYU goals, and created two chances on the night.

M Riley Tiernan, Rutgers – A goal and assist from the freshman kept the Scarlet Knights tied at 2-2 against Arkansas’ stellar attack. Tiernan has made a strong case for National Freshman of the Year honors.

F Makaylie Moore, BYU – Moore scored two goals, another senior that enjoyed a stellar shift. She scored the first and fourth goals of the game, on either side of Colohan’s brace.

F Anna Podojil, Arkansas – Despite missing her penalty kick in the shootout, Podojil netted the equalizer early in the first half and had three Key Passes on the evening. She also created three chances in the match.

F Kelsey Turnbow, Santa Clara – A pair of quickfire goals in the first half provided the winning margin on the road at Duke. Turnbow scored the first and then assisted Isabella D’Aquila’s goal.