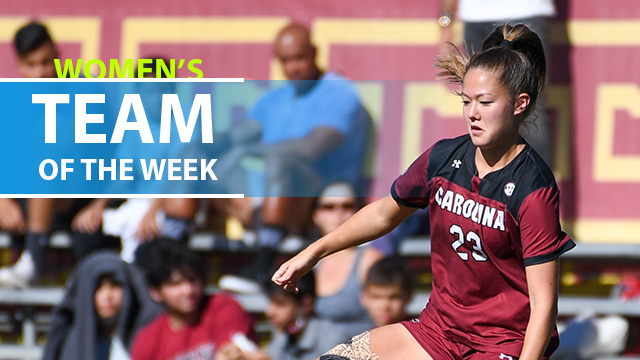 One of those is seeking a return to the College Cup after traveling to Southern California and winning both games. South Carolina best Hofstra on Friday, and then defeated Penn State by a 2-0 margin.

Samantha Chang earns the latest TDS Player of the Week nod, the penultimate one of the 2021 season, after scoring the winner in both games. She tallied the first versus Hofstra, then slammed home a second-half rebound on Sunday against Penn State, putting the SEC side on a path to another win.

Check out some of the other top performances from the past week of action in the DI women's soccer tournament.

GK Heather Hinz, South Carolina – Another impressive performer from South Carolina, Hinz made 12 saves against Hofstra and Penn State. The Gamecock defense is rounding into form at the perfect time of the season, especially since they hit the road for Utah for Saturday’s quarterfinal.

D Emily Madril, Florida State – The Seminoles were able to keep a shutout against a potent Pepperdine side, limiting the Waves to no clear chances and just 0.44 Expected Goals per InStat. Madril won 71% of her challenges, playing the full 90 minutes.

D Laveni Vaka, BYU – An imperious performance from BYU and the Cougar back line kept a zero on the road to defeat Virginia by a 1-0 score on Saturday. Per InStat, the BYU defense blocked seven UVA shots.

D Alexis Loera, Santa Clara – Down a player in the second half of Sunday’s third round game against Wisconsin, Loera helped to keep her side in the game. It set the table for the Karly Reeves to break the deadlock with a second half strike.

M Delaney Graham, Duke – Graham scored the winning goal in Friday’s second round match, a 1-0 win over a tough Memphis side. She also had an assist in a far more comfortable 7-1 win against St. John’s.

M Meredith Haakenson, Michigan – Now winners of eight straight, Michigan looks as good as ever. Haakenson scored twice and had an assist in wins over Wake Forest and Tennessee last week.

M Samantha Chang, South Carolina – The Canadian picked the perfect weekend to score two goals and added an assist. She has played big minutes for the bulk of the season, but hasn’t provided the statistical output until now.

M Riley Tiernan, Rutgers – Two sensational goals and an assist powered Rutgers into the third round thanks to a 4-1 win against Saint Louis. The Big Ten champs survived on penalty kicks against a TCU team that scored late.

F Parker Goins, Arkansas – Goins scored a goal and had an assist in each game last week, both wins against ACC opponents. She scored the third in a 3-0 win over Virginia Tech, and assisted on the first and scored the second in Sunday’s 3-2 win over Notre Dame.

F Messiah Bright, TCU – Bright’s hat trick on Friday was an epic performance, helping TCU avoid an upset against Princeton on Friday. She was unable to help them past Rutgers, however.

F Olivia Wingate, Notre Dame – The senior forward scored in both games, a 1-1 draw against Purdue (which the Irish won on penalty kicks) and the 3-2 loss versus a tough Arkansas side on Sunday.