Women’s Team of the Week: November 17 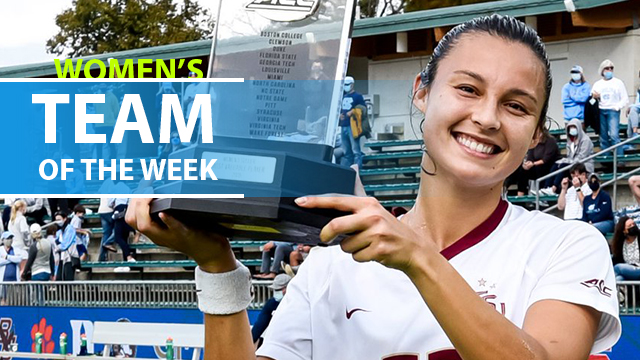 The SEC is the last conference standing.

That leaves the SEC as the final side in action, with the quarterfinals of the conference tournament beginning on November 17.

Florida State captured the ACC tournament title on Sunday, holding off North Carolina for a 3-2 win. The latest Player of the Week nod goes to Clara Robbins, as she fired home a pair of goals to put the Seminoles up early, before they hang on to the lead.

Check out some of the other top performances from the past week of action in Women’s DI soccer.

D Kim Rodriguez, Oklahoma State: A comprehensive defensive effort led OSU to a 1-0 win against rivals Oklahoma. Rodriguez played every minute, as the Cowgirls did enough to keep the zero.

D Jimena Lopez, Texas A&M: The left back excelled in last Monday’s 2-0 win against Auburn, capping off A&M’s excelling regular season. She assisted on one of the goals and was her usual effective self when called upon to defend.

D Grace Wiltgen, Kansas: The defender setup a pair of goals in Kansas’ season finale, a 4-1 win on Sunday against Oklahoma.

M Alyssa Malonson, Auburn: The midfielder engineered both Auburn goals in Sunday’s 2-1 win against Georgia in the second round of the SEC tournament.

M Macy Trujillo, Missouri: In Sunday’s second round win against Florida, Trujillo had a hand in both goals, scoring the opener and assisting on the other in a 2-1 victory.

M Jaelin Howell, Florida State: Another excellent set of games for Howell, who helped stifle Notre Dame on Tuesday, got her name on the score sheet in Friday’s win over Duke, and then anchored the middle of the midfield to lay the platform for FSU’s win in the ACC tournament final.

F Deanne Rose, Florida: While the Gators came up short in Sunday’s game against Missouri, Rose helped fire the team to a 6-5 win (not a typo) against Kentucky in Friday’s first round. She scored twice and assist on another goal.

F Jordyn Rhodes, Kentucky: It may not have resulted in a first-round win, but Rhodes scored a hat trick and had two assists, contributing to all five Wildcat goals in their loss.

F Tinaya Alexander, LSU: The Tigers have picked a perfect time to win their first two games of the season, beating Alabama on Friday and edging Mississippi in overtime. Alexander grabbed both goals in Sunday’s 2-1 victory over the Rebels.