Women's Team of The Week: November 29 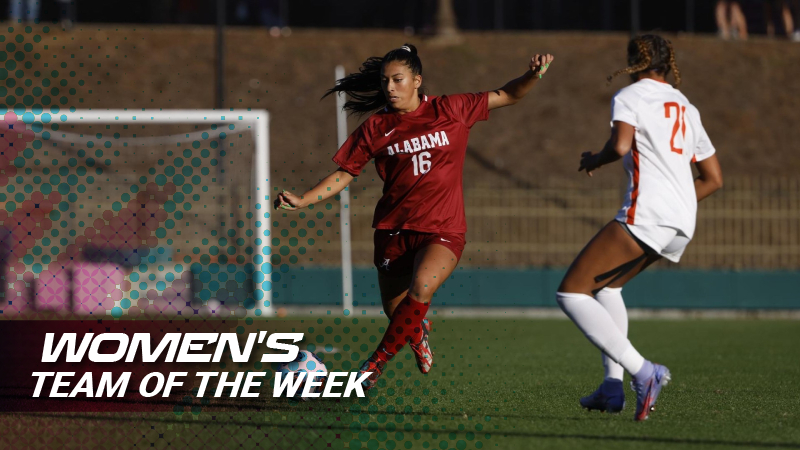 It was Reyna Reyes’ first touch that sealed things. The Alabama midfielder seized onto a loose ball in the box, and could have lashed a shot with her weak foot. But we quickly shifted the ball on to her stronger left side, creating just enough space to slot the ball home with her left. It was a sublet moment of quality and one that carried her Alabama side to a 3-2 win over Duke in the NCAA Tournament quarterfinal. But her influence on the contest expanded beyond that one moment.

The left midfielder starred for all 11 minutes, operating on the left side of a midfield four with aplomb. She linked in the final third, tracked back to defend, and never seemed to stop running. And although Alabama had contributors all over the pitch, Reyes stood out — and eventually settled things. She's the final player of the week for the 2022 women's DI college season.

GK Emmie Allen, North Carolina - Allen was crucial when called on for North Carolina, tallying six saves and picking up a clean sheet against Notre Dame.

D Lauren Flynn, Florida State - Flynn didn’t have much defensive work to carry out until late in the game. But her stewardship of the back line — and composure on the ball — helped Florida State to a 1-0 win.

D Tori Hansen, North Carolina - Hansen has altered her game to fit into the Tar Heels’ 3-5-2 system. And she was at her versatile best against Notre Dame, playing a crucial role as they saw off the Fighting Irish.

D Gessica Skorka, Alabama - Skorka posted an assist and put in a defensive shift as the Crimson Tide advanced to their first ever College Cup.

M Sofia Cook, UCLA - Cook scored the Bruins’ most important goal of the season so far, lashing a shot in to the bottom corner with the outside of her right foot.

M Reyna Reyes, Alabama - Reyes was vital at both ends for Alabama, and provided the game winning goal to send the Crimson Tide to the College Cup.

F Gianna Paul, Alabama - Paul’s attacking punch off the bench has been vital all year, and it manifested in a big way Saturday, as the forward grabbed a goal off the bench.

F Michelle Cooper, Duke - Cooper kept Duke in the game against Alabama, bagging a brace in five minutes to tie the game in regulation time.

F Ally Sentnor, North Carolina - Sentnor opened the scoring for the Tar Heels in a 2-0 win, reacting first to a shot that clanged off the crossbar with a neat header into the bottom corner.