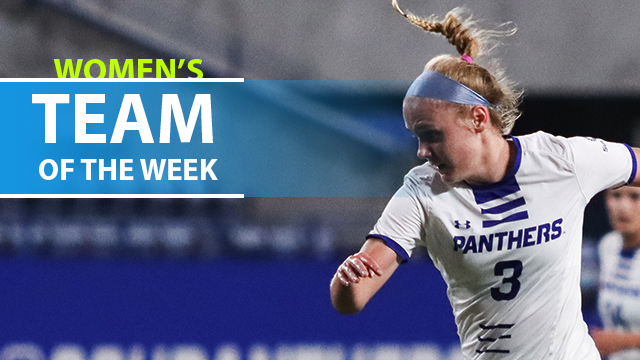 The big conferences and the programs playing through the Coronavirus pandemic get most of the attention and headlines, with the ACC, Big 12 and SEC carrying the way.

But the Sun Belt Conference is playing on, and one program continues to excel. Georgia State was coming off a big win against South Alabama last weekend, and extended their winning streak to three with a pair of victories over Appalachian State and Coastal Carolina.

A freshman was at the heart of this success, as Madison Johnston grabbed a goal in each game, including the lone strike in last Thursday’s 1-0 defeat of App State. Georgia State now hold a 6-1-1 record and is first place in the Sun Belt Conference.

See which other players excelled in DI action over the past week.

GK Hensley Hancuff, Clemson: The move to the Tigers has brough out the best in Hancuff, and she kept her side in front with an eight-save performance on the road against Wake Forest. That laid the platform for a 2-0 win on the strength of two goals in the first half.

D Caitlin Cosme, Duke: Another strong effort from the defender helped the Blue Devils pick up another ACC win, defeating Virginia Tech by a 2-0 score. Cosme puncuated her performance with a goal from the penalty spot.

D Chloe Japic, Baylor: Defense has been a strength for the Bears even if the results hadn’t been there. But Baylor finally got their first win of the fall season, as Japic helped anchor a stout defensive effort in a 2-0 victory over Kansas.

D Brandi Peterson, TCU: While the offense carried the day for TCU, producing more than three Expected Goals against Oklahoma State, the Horned Frogs got a goal from Peterson and needed to hold on to a 2-1 win. Along with the goal, Peterson saw a lot of the ball, completing 86% of 64 pass attempts.

D Anna Patten, South Carolina: It was an expected close match between the Gamecocks and Vanderbilt. Patten helped keep her team in front, despite conceding a second half goal. The senior defender went on to convert the winning penalty kick in the second overtime to secure a home win.

D Jimena Lopez, Texas A&M: Lopez converted the winning goal from the penalty spot as the Aggies held on for a 2-1 win against Florida in a crucial SEC matchup.

M Onyi Echegini, Mississippi State: The sophomore from England opened the scoring in Mississippi State’s 2-1 victory against LSU. She offered a threat with the ball, attempting nine dribbles on the evening.

M Stefany Ferrer-vanGinkel, West Virginia: The Mountaineers traveled to Texas and picked up the full points in Lubbock with a very good offensive performance. They outshot Texas Tech 16-2, with Ferrer-vanGinkel accounting for the winner with an 82nd minute goal in the 2-1 win. Along with her goal, she created two chances as West Virginia posted a 3.8 xG.

M Lizzie Mayfield, Louisiana: Faced with two games on the road, the Raging Cajuns secured two 2-0 win against Little Rock and Central Arkansas over the weekend. Mayfield played a hand in three of her team’s four goals, scoring a goal and setting up another against ULR, and chipping in an assist versus UCA.

F Julia Grosso, Texas: It was an emphatic performance from the Texas offense, which defeated Kansas State by a 7-0 score. Grosso was one of several strong performers, scoring a goal and completing 87% of her passes.