The international recruits from this year’s freshman class continue to pay dividends for LSU.

Canadian youth international Summer Clarke keyed an offensive barrage from the Tigers. She scored five times across two games as LSU picked up two more wins against SEC opponents, 5-3 over Arkansas and 2-0 against Alabama. The upstart program remains in first place in the conference. Joining Clarke on this week’s Team of the Week is fellow international recruit Emma Fletcher, who has played with the New Zealand youth setup. 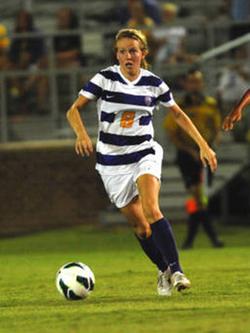 Thanks to her scoring exploits, Clarke is this week’s TDS Player of the Week. Here is the full women’s Team of the Week.

TopDrawerSoccer.com Team of the Week

GK Tarah Hobbs, Minnesota: The netminder picked up two shutouts in Big Ten action over the weekend. First, she played 110 minutes and made seven saves in a 0-0 tie against Ohio State, following that up with another seven save performance in a 1-0 upset win against Penn State.

D Courtney Smith, SMU: The defender scored two goals on set pieces against Louisville on Thursday, and also recorded an assist on SMU’s first goal in its 2-1 victory over Cincinnati on Sunday. The assist gave her nine for the season for the senior left back.

D Taylor Leach, South Carolina: The defender helped the Gamecocks string together two more wins, scoring the game winning goal in a 2-1 win over Florida and helping her side to a 1-0 win over Tennessee.

D Kelli Hubly, Kentucky: After scoring and setting up a goal in Kentucky’s 3-1 win over Mississippi State on Friday, Hubly logged 90 minutes and helped her side maintain a one-goal lead in a 2-1 win over Vanderbilt.

MF Emma Fletcher, LSU: Summer Clarke supplied the finishing touch over the past week, and it was Fletcher who helped unlock the opposing defenses, setting up four of Clarke’s five goals in the last two games. The New Zealand youth international leads the Tigers with 10 assists on the year.

MF Kaitlyn Fitzpatrick, California: With three games in the last nine days, Fitzpatrick helped the Bears to wins in every game. After scoring a goal and notching an assist last Monday against San Francisco, she scored twice on Friday against Arizona State and then played 61 minutes in a 2-1 win over Arizona wrapping up the undefeated week on Sunday.

MF Shea Groom, Texas A&M: The attacking midfielder provided a total of three assists in the two road wins over Auburn and Missouri, as A&M continues to recover from a slow start to the season. The Aggies extended their winning streak to four.

MF Maegan Kelly, Marquette: The engine room for Marquette’s offense, Kelly scored a goal and set up the game winner against St. John's on Friday, and helped her side to a 3-0 win over Xavier on Sunday.

F Summer Clarke, LSU: The freshman goalscorer accounted for five of her team’s eight goals on the weekend, as the Tigers snagged wins over Arkansas and Alabama to stay undefeated in SEC play.

F Alexa Quaranta, UMBC: After struggling the week before, Quaranta helped the Retrievers bounce back over the past week, coming through in the clutch with game winning goals against Binghamton (a 1-0 win in the second over time on Thursday) and Albany (a 3-1 win on Sunday). The win over Binghamton was the program’s first conference win in over two years.

F McKenzie Meehan, Boston College: The sophomore forward continued her climb up the national scoring charts, with three more goals in her last two games. She scored twice to give BC an early lead over Florida State last Thursday, but the Eagles couldn’t hold on, losing 4-3. Meehan chipped in a goal and an assist in a 4-1 win over Duke on Sunday.