Women's Team of the Week: October 12 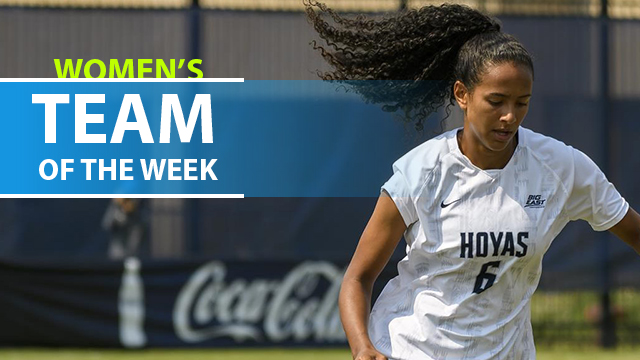 A four-team race in the Big East is taking shape, and the Hoyas managed to keep pace with Xavier last week.

With a pair of 1-0 wins, the Hoyas put some distance between third-place squad Butler, and just a point off Xavier.

Grad transfer Sydney Cummings played a pivotal role in both victories, as the Hoyas were able to beat Butler and St. John’s. Cummings, who joined this year from Brown, played 90 minutes across both games, helping her squad keep a pair of shutouts. For good measure, she scored the winning goal in Thursday’s win at home against Butler.

Check out some off the other top performances from the past week of action in DI women’s soccer.

GK Alaina Werremeyer, Kansas State – The shot-stopper enjoyed an excellent week, helping Kansas State to a pair of draws against Big 12 opponents. After making nine saves against West Virginia in a 1-1 draw, she made an impressive 13, keeping a shutout in a 0-0 draw versus Baylor on Sunday.

D Kayla Duran, Brown – A 3-1 win against Princeton on Saturday sets up a virtual title decider in the Ivy League race this coming Saturday between Harvard and Brown. Duran’s been a key cog this season at the back, and she played 90 minutes, scoring the second goal of the game in the win.

D Sydney Cummings, Georgetown – The grad student excelled for the Hoyas last week in a pair of 1-0 conference wins. She scored the winning goal in Thursday’s 1-0 victory over Butler, and then locked down one of the nation’s top scorers in Zsani Kajan in another victory.

D Alyssa Malonson, Auburn – Two games, two big 1-0 wins in SEC play for the Tigers. Malonson assisted on the game-winning goal against LSU on Sunday, after helping secure the win over Mississippi State earlier in the week.

D Naomi Girma, Stanford – The Cardinal are back on track after making a trip to Washington state and coming away with two wins. Girma scored the winner and helped Stanford keep a clean sheet in a 1-0 win at Washington State, never an easy place to play. She also played in a 2-1 win at Washington.

M Croix Bethune, USC – As the Pac-12 race heats up, Bethune is emerging as a key player for USC. She assisted on three goals last week, helping her squad pick up wins over Colorado and Utah.

M Taylor Huff, Tennessee – Freshmen have been a huge part of Tennessee’s success so far. Huff was at it against last week, helping the Volunteers to wins against Florida and South Carolina. The midfielder scored the winner on Sunday, a massive 1-0 defeat of the Gamecocks.

M Lucy Porter, Hofstra – The Pride’s domination continued over the past week, picking up two more wins. Porter, a grad student from England, assisted five of the team’s six goals.

M Sammi Fisher, Notre Dame – Another team enjoying an excellent fall 2021 season, Fisher helped the Irish to wins against Louisville and Clemson last week. She had two assists in the win over the Cardinals, and setup Eva Gaetino’s overtime winner against the Tigers.

F Madi Wolfbauer, Bowling Green – Wolfbauer’s goal-scoring streak continued last week, as she scored once against Ball State, and then added a brace in a 3-1 win over Miami (OH). BGSU continues to improve after struggling a bit during the non-conference portion of the schedule.

F Jameese Joseph, NC State – After enduring a five-game losing streak, the Wolfpack bounced back with a huge, 2-1 overtime win against Duke last Thursday. Joseph scored the winner in that one with 17 seconds left. She also grabbed the opening goal in a 2-1 defeat of Louisville on Sunday.