Women's Team of the Week: October 16 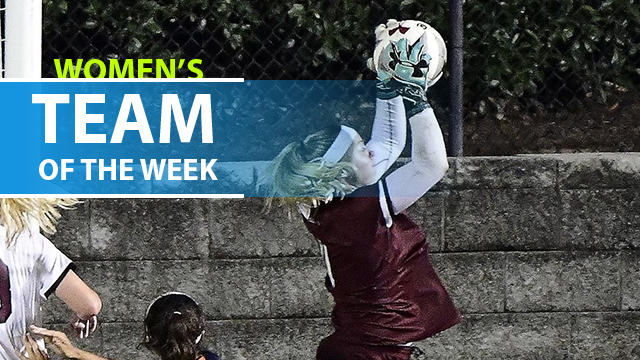 One of the constants over South Carolina’s past few years of success has been in goal.

Mikayla Krzeczowski stepped in right away as a freshman, and in her junior season, is now writing her name in the record books.

She led the Gamecocks to a 0-0 draw over the weekend, snapping the Commodores winning streak and equaling the SEC record for career shutouts (33). Krzeczowski made five saves, stepping up in the second half in particular to ensure that the away side came away with a point. Last week, she became the all-time shutout leader in South Carolina history – with another season to go.

Check out some of the top performances over the past week of action in women’s Division I soccer.

GK Mikayla Krzeczowski, South Carolina – Krzeczowski’s accomplishments in goal helped South Carolina keep pace with Vanderbilt in the SEC title race. They still sit three points behind the Commodores, and each have three games left in the regular season.

D Isabel Nelson, Pepperdine – With their season looking over after winning one of their first six games, the Waves have bounced back with wins against Santa Clara and BYU. The most recent win on Saturday, saw Nelson score the winning goal and lead a defensive effort that secured a 2-1 victory.

D Alina Ortega Jurado, Penn State – The senior defender led a defensive effort that secured two 1-0 wins over the past week in conference play. Those victories took the Nittany Lions one step closer to a Big Ten regular season title.

D Jenna Staudt, Georgetown – It was another win and another shutout for Georgetown, which blanked Providence 1-0 at home. The senior’s been one of several key players that have led the Hoyas to success this season.

M Amy McGivern, UT Martin – A mammoth performance from McGivern saw the senior score five goals in wins against Belmont and Austin Peay. She notched two in the first game, and then bagged a hat trick on Sunday.

M Hannah Friedrich, Saint Louis – Another prolific freshman in the Atlantic 10, the local product supplied both game-winning goals last week for the Billikens, as they extended their A10 record to 8-0.

F Leah Pruitt, USC – Playing Washington State on the road, Pruitt helped ensure that USC wouldn’t suffer a loss away from home. She scored the opener from the penalty spot and was credited with an assist on Penelope Hocking’s winning goal in a 3-2 victory.

F Raimee Sherle, Boise State – The last three games have all been 1-0 wins on the road for Boise State, which has emerged as the clear favorites in the Mountain West race. Sherle scored both winners in the past two games, which were victories against Colorado College and Air Force last week.

F Evelyne Viens, South Florida – One of the nation’s best striker’s propelled South Florida to a huge, 2-0 win against Memphis. She scored both goals as the Bulls took over first place in the AAC.