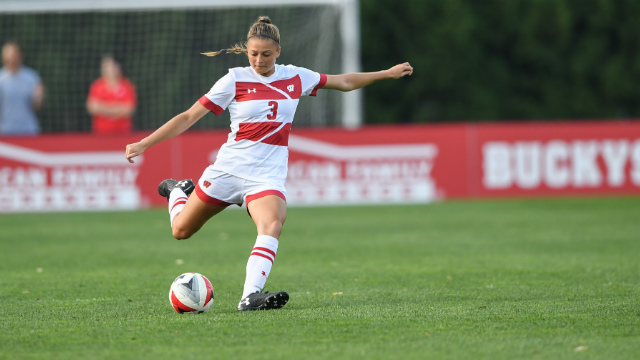 Every result at this stage of the season is vital for teams searching to solidify their NCAA bid.

Wisconsin did justice to its chances of getting an at-large bid by winning its final game of the Big Ten regular season last week, 1-0 against the favored Penn State.

And it was a freshman that played a vital role in that, plus a win in the Big Ten quarterfinal game on Sunday. Defender Samantha Kleedtke assisted on the winning goal against Penn State, and then also had a hand in the winner in Sunday’s 2-0 win against higher-seeded Minnesota.

The Michigan Hawks product has started every game for the Badgers, who currently sit at No. 22 in the RPI, very safe territory ahead of Friday’s conference tournament semifinal against Northwestern.

GK Kelsey Dossey, Missouri – With wins crucial at this point in the season, Dossey stepped to the front to help Missouri to a pair of wins. She kept a clean sheet in Thursday’s SEC finale, a 2-0 win against LSU, and then made four saves in a 3-1 win in the first round of the SEC Tournament.

D Laurene Tresfield, Oklahoma State – The French defender scored the game-winning goal for the Cowgirls against Texas, in a 1-0 overtime win that secured the Big 12 title.

D Bianca St. Georges, West Virginia – While the Mountaineers didn’t finish atop the Big 12 standings, they did finish the regular season with a 2-0 win against Kansas. St. Georges led the back line to a shutout on the road as WVU prepares for the upcoming conference tournament.

D Samantha Kleedtke, Wisconsin – Along with her contributions in the final third, Kleedtke played all but seven minutes on a back line that picked up two shutouts last week.

D Grace Fisk, South Carolina – Recently named the SEC Defender of the Year, Fisk led the South Carolina back line to a 1-0 win against Florida in Thursday’s regular season finale.

M Rachel Corboz, Georgetown – Needing a win on home turf against Xavier, Corboz stepped up and scored the game-winning goal from a free kick to secure a 1-0 win for the Hoyas and the Big East regular season title.

F Kayla McCoy, Duke – The winning run continues for Duke, which defeated Virginia 1-0 on Thursday to win the ACC regular season, and extended to Sunday’s ACC conference quarterfinal in a 3-1 win over BC. McCoy had a hand in three of the four goals, as she scored once against Boston College and assisted on goals in both games.

F Mimi Asom, Princeton – The Tigers kept pressure on Colombia in the Ivy League race, winning 2-0 against Cornell. Asom had a hand in both goals, setting up the first and then converting a penalty kick to round out the scoring.

F Catarina Macario, Stanford – After UCLA kept Macario relatively quiet on Thursday, the freshman burst into action against USC, scoring a goal and setting up another as the Cardinal clinched the Pac-12 title.

F Dina Orschmann, UCF – The German rookie scored the tying goal for UCF as they drew 1-1 against South Florida.