Women’s Team of the Week: October 26 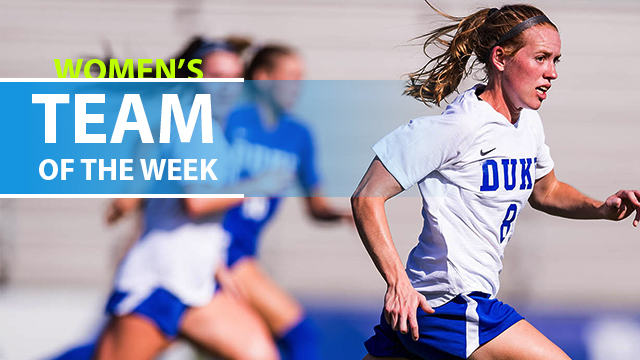 The race for a national championship seems relatively wide open in DI women's soccer. One program continues to position itself as a contender after a successful week in ACC play.

With home wins against Notre Dame and Florida State last week, the Duke Blue Devils have pole position on a potential No. 1 seed for the NCAA tournament. Duke can’t win the ACC regular season title, but are certainly conference tournament contenders.

The latest TDS Player of the Week played a massive role in Duke’s success last week. Tess Boade scored the game winner in Sunday’s win over then-No. 1 ranked Florida State. She also was credited with an assist on a game-winning goal in Thursday’s 1-0 defeat of Notre Dame.

GK Kayza Massey, West Virginia – A road trip to Texas engineered two 0-0 draws in Big 12 play. Massey made seven saves in each game against Texas and Baylor as the Mountaineers look to finish the season strong.

D Kelly Ann Livingstone, Georgetown – Xavier may have claimed the Big East regular season title, but Georgetown does remain unbeaten and are a quality side. Livingstone played 90 minutes in two shutouts, scoring a goal and adding an assist in a 3-0 defeat of Marquette on Sunday.

D Ayooluwapo Oke, California – The freshman wingback played every minute in Sunday’s 1-0 win against Arizona State. She also helped keep a clean sheet in a 1-0 win earlier in the week versus Arizona. It’s a tough finishing run for the Golden Bears, but an at-large bid could be possible if they find ways to beat USC, UCLA and/or Stanford.

D Emma Clarke, Houston – The New Zealand defender played the full 90 minutes in wins against Memphis and Cincinnati, as the Cougars bounced back from back-to-back losses. Clarke was crucial in a 1-0 shutout win over Memphis.

M Tess Boade, Duke – Boade’s decision to return as a grad student has been huge, as she’s scored seven goals and added five assists. She’s been a talented partner in the final third for Michelle Cooper.

M Raleigh Loughman, Michigan – With goals against Penn State and Maryland, Loughman helped push the Wolverines to two final wins in the last week of the regular season.

M Emily Mathews, Purdue – A tremendous regular season came to an end for Purdue over the weekend, as the Boilermakers finished second in the conference. Mathews provided assists on both goals in a 2-0 win over Indiana, and setup the winner in a 1-0 defeat of Northwestern. Purdue is set for the No. 2 seed in the Big Ten tournament and should receive an at-large bid in the NCAA tournament.

M Mikayla Colohan, BYU – The Cougars continue to roll through WCC opposition, and Colohan’s dominant season is a huge reason. She scored in wins against San Francisco and Loyola Marymount and looks poised for one final big finish.

M Scarlett Camberos, UC Irvine – Two games, two huge wins in the Big West race for UC Irvine. Camberos scored three times and added an assist in a 5-0 win against CSU Bakersfield. She also scored in a 6-1 defeat of CSUN.

F Amirah Ali, Rutgers – Getting Ali going at this point in the season could be instrumental in an NCAA tournament push for Rutgers. She scored the winning goal against Indiana, and then added a brace versus Illinois.

F Nieva Gaither, Furman – While a Southern Conference regular season title eluded Furman, Gaither ensured a strong finish to the regular season. After scoring twice against Mercer earlier in the week, Gather scored the winning goal in Sunday’s 4-0 win over The Citadel.