Women's Team of the Week: October 2 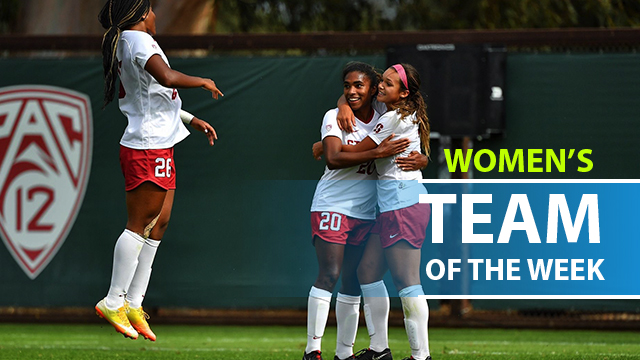 Sophia Smith is starting to find her feet at Stanford. That doesn’t bode well for any program looking to knock off the reigning national champions.

Smith and sophomore teammate Catarina Macario led the Cardinal to a pair of close conference wins. The U.S. youth national team forward accounted for the winning goals against UCLA and USC last week, maintaining Stanford’s unbeaten start to the season.

The wins helped Stanford out to an early lead in the Pac-12 race, and with Smith starting to click alongside Macario and Madison Haley, the team’s attack looks as loaded as ever.

Check out some of the other top performances from the past week of Division I women’s soccer.

GK Amanda McGlynn, Virginia Tech – With both teams battling the elements, McGlynn made six saves in a 1-0 win against Virginia last Thursday. She also made one save and kept a clean sheet in Sunday’s 2-0 win over Pitt.

D Maureen Kennedy, Bowling Green – Kennedy scored a goal, had an assist and helped the Falcons to a pair of shutout wins as BGSU improved to 4-0 in MAC play for the first time in school history. She tallied a goal in a 3-0 win over Northern Illinois, adding an assist in a 2-0 victory over Western Michigan.

D Sarah King, Baylor – The Bears kept a clean sheet last weekend, blanking both TCU and Texas Tech at home. King played the full 90 in both games as Baylor jumped into the Big 12 race ahead of a clash with West Virginia next weekend.

D Sarah Trissel, Georgetown – It’s been a quietly excellent season so far for Georgetown, which continues to dominate the Big East at both ends of the field. Trissel, a California native, started wins against DePaul and Seton Hall, scoring the winning goal in the latter victory.

D Maddy Haro, Washington State – Make it 10 straight wins for the Cougars, with Haro helping WSU to wins against Oregon and Oregon State at home. Haro assisted on one of the goals against Oregon as well.

M Dorian Bailey, North Carolina – Bailey setup the winning goal and scored an insurance tally as North Carolina continued its perfect start to the ACC season with a 5-1 victory against Louisville.

M Mia Brascia, Houston – Brascia scored two goals and an assist as Houston went unbeaten in a pair of American Athletic Conference matches. scored the opening goal in a 3-2 double-overtime victory over East Carolina and assisted on the game-tying goal. She scored the lone Houston goal in a 1-1 draw with Cincinnati.

M Emily Littell, George Mason – A huge week from Littell helped the Patriots to a pair of much-needed Atlantic 10 wins. She scored the winning goal against George Washington, a 2-0 victory, and bagged a brace, which included the winner, in a 3-0 defeat of Davidson.

F Raimee Sherle, Boise State – Make it two straight Team of the Week appearances for Sherle, who continues to tear up the record books. She scored four times over the past week

F Sophia Smith, Stanford – Now with six goals in eight games, Smith is becoming a force in the college game, which is far from a surprise. If she integrates well alongside Macario and the pair can thrive together, it makes for one potent attack.