Women’s Team of the Week: October 5 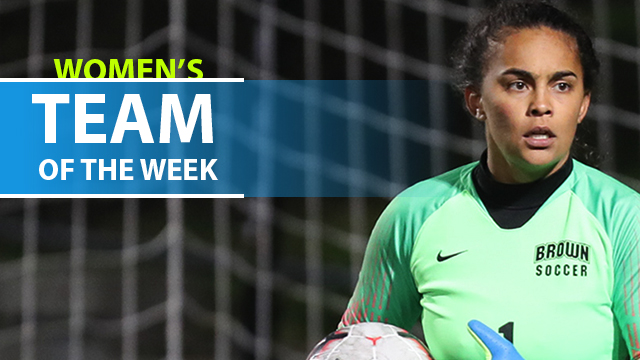 Through the first couple of weekends of action, the Ivy League is not disappointing.

The latest round saw Princeton, Brown and Harvard all win again, setting up big games over the next few weeks as the stakes continue to increase.

Kayla Thompson helped Brown pick up a big road win on Saturday, as her performance in goal against Columbia earns the latest Women’s Player of the Week nod. Thompson made five saves, including a stop on a penalty kick, in a 2-0 win. The Lions outshot the Bears by a 13-11 margin, but thanks to Thompson’s imperious performance, came away with the win.

ICYMI: Check out Kayla Thompson's PK save from Saturday's win!

Check out some of the other top performances from the past week of action in Division I women’s soccer below.

GK Kayla Thompson, Brown – Saturday’s win was Brown’s third shutout of the season, as she remains one of the best goalkeepers in the college game. She’ll be a huge piece for the Bears as the Ivy League race picks up pace.

D Emily Pringle, Penn – After losing 3-0 in the Ivy League opener against Harvard, Pringle and Penn bounced back with a 2-0 defeat of Cornell. Pringle scored what turned out to be the winning goal, playing 86 minutes as the Quakers look to keep pressure on the aforementioned trio.

D Jenna Oldham, Boston University – Boston remains in first place in the Patriot League, tied with Bucknell with a 3-0 record. Oldham scored the winning goal in a crucial 1-0 win.

D Isabella Scaturro, Alabama – The defender setup the game-winning as Alabama picked up a much-needed win against LSU over the weekend. She also played the full 90 minutes to help keep the shutout.

M Carlee Giammona, Pepperdine – After a stellar run during non-conference play, Pepperdine began WCC play with a bang. Giammona scored the winner and assisted on another goal in a 3-0 defeat of Portland.

M Julia Grosso, Texas – The season is starting to come together for the Longhorns at just the right time. Grosso assisted on Trinity Byars’ goal on Thursday, before tallying the winner in a 1-0 victory against Texas Tech.

M Frankie Tagliaferri, Rutgers – Another huge week from Tagliaferri helped Rutgers to two road wins in the Big Ten. She scored in 2-1 wins against Minnesota and Ohio State.

F Beata Olsson, Florida State – No one appears capable of stopping the Seminoles at this point, and Olsson’s two goals and one assist in a 4-1 win over Clemson.

F Jaida Thomas, Tennessee – Winning in College Station is no small feat, and it’s what Tennessee managed to pull off over the weekend. Thomas scored twice, including the winner, in a 3-1 victory against Texas A&M.

F Sarah Griffith, Purdue – The Boilermakers look like a surprise package in the Big Ten, despite a 2-1 loss against Michigan last Thursday. However, Griffith, who scored all three goals for Purdue last week, helped her team pick up the full points in a 2-1 win over Wisconsin on Sunday.