Women’s Team of the Week: October 9 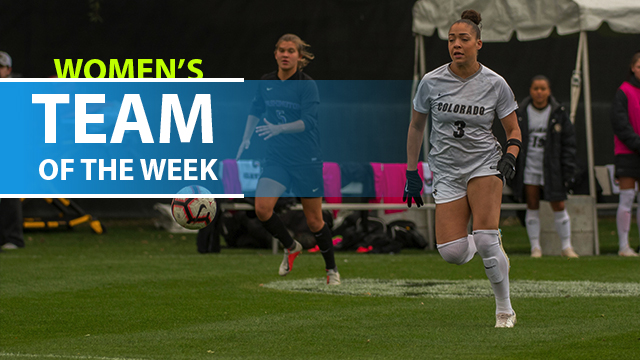 After missing the entire 2017 season due to offseason knee surgery, Jorian Baucom is making the most of her one season in Colorado.

Baucom transferred to Colorado from LSU last year, but never made an appearance for the Pac-12 side thanks to the injury. Now healthy in 2018, she is a huge piece of Colorado’s unbeaten run this season. The Buffaloes haven’t lost through 14 games, sitting on an 11-0-3 record, with Baucom coming up huge in two Pac-12 games last week.

First against previously undefeated Washington State, Baucom scored the second goal on the day, which ultimately stood up as the winning strike in a 3-1 defeat of the Cougars. On Sunday, with Washington making the trip to Boulder, Baucom accounted for both goals, including the winner in the second overtime of a 2-1 victory.

See which other standouts join Baucom on the latest Team of the Week.

GK Brielle Preece, Pepperdine – Thanks to a big game by Preece, Pepperdine found a way to defeat Santa Clara on home turf. The redshirt senior stopped a penalty kick and made four stops overall as the Waves defeated the Broncos by a 1-0 score.

D Nia Dorsey, Vanderbilt – The defender played every minute in two SEC wins, as Vanderbilt beat Mississippi State and Tennessee. She also assisted on a goal in each match, including the winner last Thursday against the Bulldogs.

D Tegan McGrady, Stanford – A premier attacking left back, McGrady played every minute in Friday’s 1-0 overtime win against Oregon. She then kicked off a goal barrage with a fantastic free kick, as the Cardinal scored three times in the first half against Oregon State. That allowed the Cardinal coaching staff to rest McGrady as well as a number of other regulars after the break.

D Cami Nwokedi, Penn – Penn’s momentum in the Ivy League race took a step forward over the weekend, as they edged Columbia 1-0 on home turf. Nwokedi logged the full 90 and kept Columbia off the scoresheet in the win.

D Julianne Ross, Northeastern – The Huskies solidified their status as the CAA’s top team, winning a pair of games against Hofstra and Elon last week. Ross played every minute at the back in the victories, leading the team to a pair of shutouts.

M Sam Coffey, Boston College – Coffey’s remarkable 2018 continued last week, with four goals in two ACC games. She scored a hat trick in Thursday’s 3-0 win against Virginia Tech, and then notched the winner in a 2-0 victory over NC State. The sophomore needs one more goal to become the first player to reach double-digit totals in goals and assists this season.

M Viviana Villacorta, UCLA – Coming on strong over the past few weeks, Villacorta dominated the midfield in wins against Arizona State and Arizona. She has three goals in her past four games, including a goal and assist in Sunday’s 2-0 win over the Wildcats.

M Addison McCain, Texas A&M – The Aggies continued to roll after a couple of SEC bumps, defeating Auburn and Kentucky 4-2 and 4-1 respectively. McCain notched a goal and assist in each match and continues to be one of several standout performers this season for the SEC side.

M Montana Sutton, Virginia – Facing its final road trip of the regular season, Virginia beat Louisville on Thursday and topped Notre Dame on Sunday. After helping the midfield lockdown the Cardinals in a 1-0 win, Sutton scored a goal and had a hand in the other two in a 3-0 victory.

F Ginger Deel, James Madison – Looking to keep in touch with Northeastern in the CAA race, Deel stepped up in a big way for the Dukes. She scored twice and added two assists across wins over Towson and UNC Wilmington, including the winning tally in overtime against UNCW.

F Jorian Baucom, Colorado – Now with 11 goals in 14 games, Baucom is closing on her season high of 15, previously set in 2015 while she was at LSU. The Buffaloes still have the best of the Pac-12 left to play, with matches against Stanford, USC and UCLA to come later this month.