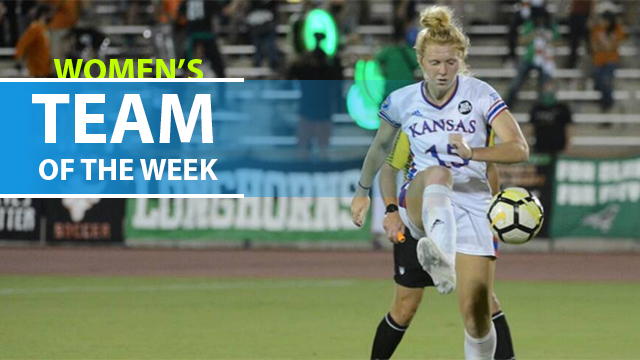 Even with a much smaller season taking place, the Team/Player of the Week lives on.

It will draw from a much smaller pool of players, but there was still a smattering of competitive games from the weekend.

The first women’s Player of the Week nod for this truncated, bizarre 2020 season goes to Ceri Holland from Kansas.

With two of the program’s all-time greats graduating, Holland was going to have to shoulder the scoring load from central midfield as newcomers adjust and the Jayhawks retooled. With only conference games on the docket, the margin for error is small. But Holland stepped up, scoring the game-winning goal as KU picked up a 1-0 win on the road against Texas.

Check out some of the top performers from the past week of women’s DI college soccer action below. Please send any nominations to college@topdrawersoccer.com.

GK Jennifer Wandt, Baylor: A young Bears side, which started four freshmen against TCU, is going to need a big season from Wandt to keep them competitive. She put in a shift on Friday night, making five saves to snatch a 0-0 draw.

D Tijana Duricek, TCU: The senior helped keep Baylor’s attack at bay, as they failed to create many clear-cut chances. She completed 85% of 61 pass attempt as TCU controlled the game for long stretches but couldn’t come up with a winning goal.

M Sophia Smith, Stephen F. Austin: Playing a limited slate of games and no conference schedule, Smith provided the game-winning goal for SFA as they defeated Louisiana-Lafayette by a 1-0 score.

M Stefany Ferrer-vanGinkel, West Virginia: Looking to reassert itself atop the Big 12 during this funky season, the Mountaineers traveled to Iowa State and edged a close game by a 2-0 score. Ferrer-VanGinkel put the

M Lia Godfrey, Virginia: Making her first appearance for UVA off the bench, Godfrey helped engineer her team’s second goal, as Alexa Spaanstra scored from Godfrey’s corner kick. The freshman also got her first college goal, finishing off a counter attack to make it a 3-0 game. The Cavaliers went on to win 3-1 against Virginia Tech.

M Ceri Holland, Kansas: It was a massive performance from Holland, she helped lock things down in the middle of the field for the Jayhawks, to go with her goal. She made six tackles and seven interceptions as KU picked up the 1-0 win.

F Mariana Speckmaier, Clemson: The Tigers had little trouble from Miami (FL), as a goal and assist from Speckmaier helped them cruise to a comfortable 4-0 win.

F Marykate McGuire, Duke: Just when it looked like Duke was heading towards a road defeat in last Thursday’s meeting with Wake Forest, McGuire came to the rescue. She scored an 88th minute equalizer to make it 3-3, and then popped up with the winner in overtime. Prior to that she had already setup Duke’s second goal of the game. She completed 85% of 20 passes and fired 11 shots, getting four on target.

F Leah Pais, Pittsburgh: After transferring to Pitt, Pais hit the ground running in tandem with West, her fellow Canuck. She tallied three times and chipped in an assist.