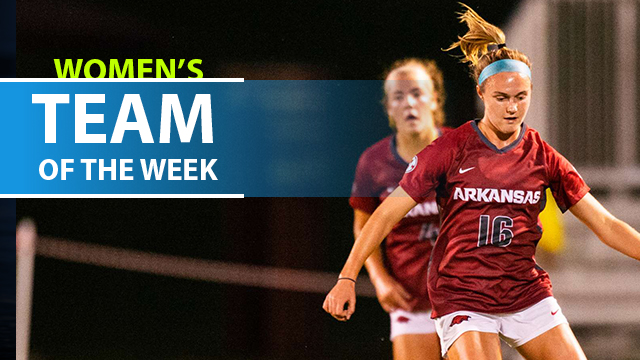 The abbreviated SEC schedule ramped things up a notch of the past week, with its conference-only scheduled featuring some big performances.

Few could match the offensive production of Anna Podojil, however.

In a college season that lacks quality up front, the sophomore striker picked up where she left off in 2019, putting in a dominant performance in Arkansas’ 4-0 win over Kentucky. Podojil had a hand in all four goals, scoring twice and setting up two more.

Check out some of the other top performances around Division I women’s soccer from the past week of action.

GK Jordan Silkowitz, Iowa State: The newcomer in goal for the Cyclones, Silkowitz made nine saves against Baylor as ISU picked up a 2-1 win. She had a really nice free kick on an impressive long-distance effort with the scores tied at 1-1 that gave her side a chance for the win.

D Maycee Bell, North Carolina: Carolina’s steady start to the season continued, and Bell was one of a couple of players to play the full 90 min her side’s 2-0 win over Duke. She scored the game-winning goal from a scrappy set piece, capping off a solid performance. Bell completed 74% of 34 pass attempted and won 67% of the challenges she attempted. Her 14 interceptions were also best on the team.

D Wrenne French, Tennessee: It was a close battle between the two in-state rivals, with Tennessee edging the game by a 1-0 score in overtime. French anchored a defensive effort that limited Vanderbilt star Haley Hopkins to just one shot on goal, setting the table for the winner.

D Claire Constant, Virginia: While the Hokie attack offered little trouble for the Virginia back line, it was partially due to Constant’s strong performance. She completed 94% of 49 passes attempted in a 1-0 win against Virginia Tech, scoring the winning goal from a set piece in overtime. Better finishing could’ve put the game away earlier, but the center back had a strong showing. With injuries

M Kathryn Castro, Kansas: Castro’s long-distance effort looped up and over everyone from well outside the box, providing the difference in a closely-contested 1-0 win against Texas Tech over the weekend.

M Olyvia Dowell, Oklahoma State: Just when it looked like their matchup against West Virginia would end in a 1-1 draw, Dowell popped up with 26 seconds left, accounting for the game winner in the second overtime.

M Brenna McPartlan, South Alabama: The central midfielder anchored the Jaguars in a pair of wins. First, she scored the winning penalty in a 4-3 shootout defeat of Coastal Carolina. In a much more one-sided affair, she tallied a late insurance goal in a 3-0 defeat of Appalachian State. She completed 83% of 75 passes in the win against Coastal Carolina, and had 30 interceptions across both games.

M Haley Berg, Texas: It took three tries for the Longhorns to pickup their first win of the season. Berg helped inspire this one, setting up the lone goal in a 1-0 defeat of Oklahoma. She completed 73% of her pass attempts and made three key passes.

F Catherine Barry, South Carolina: The freshman scored her first two goals in Division I soccer, bagging the first two tallies of South Carolina’s 4-1 win against Missouri. Both came off of goalkeeping errors, but the two goals provided the winning margin in a much-needed. She became the first Gamecock freshman to score a brace since Luciana Zullo in 2017

F Anna Podojil, Arkansas: There was no handling Podojil and the Arkansas attack in Lexington, as the sophomore dominated in the final third. Arkansas hasn’t had the most arduous schedule but looks like the team to beat in the SEC.