Women’s Team of the Week: September 18 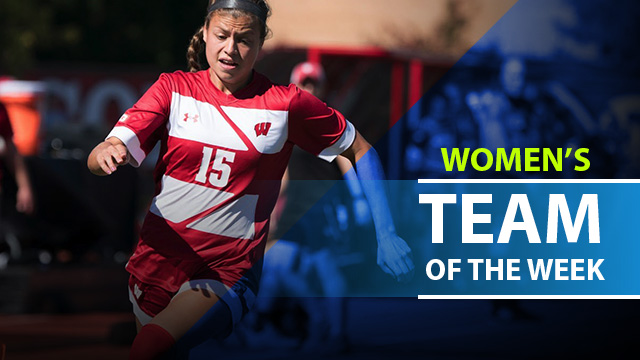 Conference games mean that the stakes are even higher, and goals even more important.

Wisconsin enjoyed an unbeaten start to their Big Ten schedule, thanks in part to the latest Player of the Week.

Dani Rhodes managed to do what few teams have this season against Northwestern: score a goal. The junior forward played 101 minutes and provided the Badgers’ lone strike of the game in a 1-1 draw. But what she provided for an encore was even more important. In Sunday’s game against Illinois, Rhodes bagged the game-winning strike in a 1-0 victory.

Her performance was one of several notable shifts put in over the past week of action in women’s Division I soccer. See who else stood out in the crowd.

GK Melissa Lowder, Santa Clara(w) – Lowder’s 13 saves on Sunday were the difference between a draw and a loss for Santa Clara, which gave a good account of itself on the road at Stanford. She also notched a shutout last Thursday, making two saves in a win over TCU.

D Taylor Troutman, Auburn – It was a massive week for Auburn, which defeated Mississippi State 3-0 and Alabama State by a 7-0 score. The defender setup a goal and helped her team keep a clean sheet against Mississippi State, and she scored and assisted in the victory over ASU.

D Madeline Anderson, Hofstra – Anderson went the full 90 in both of Hofstra’s games last week, helping her side to a pair of shutout wins against Columbia and Stony Brook. She assisted on the game’s only goal in a 1-0 win over Stony Brook.

M Chandra Davidson, Indiana – The Hoosiers made it two wins from their first two Big Ten games, with Davidson playing a big role. She scored the winning goal in overtime as IU overcame a 2-0 deficit to beat Michigan, and she assisted and helped her side get a shutout in a 3-0 win against Michigan State.

M Kim Dubs, Penn State – With a goal and an assist, Dubs ensured that Penn State began its conference schedule in style by defeating Ohio State 4-0 on home turf.

M Rachel Jones, North Carolina – A breakthrough performance from Jones helped UNC win 1-0 against Florida State in Tallahassee. While there was a hint of offside, Jones made a nice run in behind of the FSU back line and provided a calm finish to score the game’s only goal.

M Addie McCain, Texas A&M – Make it 10 straight wins in a row for the Aggies to start 2018, thanks to victories over LSU and Kansas over the weekend. McCain scored a goal in each game, including the winner against LSU.

F Dani Rhodes, Wisconsin – Rhodes picked the perfect time to score her first two goals of the season, as she had managed just two assists prior to the two games last week.

F Paula Germino-Watnick, Georgetown(w) – The creative force for the Hoyas, Germino-Watnick setup the game’s first goal as the Hoyas beat Princeton 2-1 on Thursday. On Sunday, they made it an Ivy League sweep, as Germino-Watnick scored a goal and had two assists in a 4-0 defeat of Columbia.