Women's Team of The Week: September 20 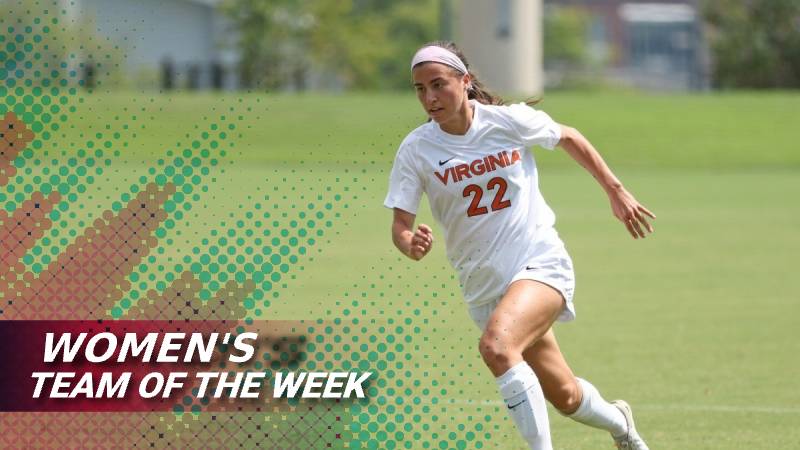 Lia Godfrey didn’t hit the ball particularly hard. But she struck it early. Still, her shot was an accurate thing, one that held its line as it darted into the corner. That goal put her Virginia team in the lead against North Carolina, the crucial finish to nudge the scoreline to 3-2. And it capped off Godfrey’s performance appropriately. The midfielder enjoyed one her best performances of the season against the Tar Heels. She was quick to a tackle, relentless in her marking, and proactive in her passing. Her energy helped the Hoos overturn a 2-0 deficit — the first time a UNC team lost after leading by two goals.

See some of the other top performances from the past week of Women's DI college soccer action.

GK Grace Gordon, Seton Hall - The goalkeeper tallied 10 saves on 20 shots against Columbia. The standout performance carried the Pirates to a 3-0 win, good for their fourth consecutive clean sheet.

D Sheridan Michel, Oklahoma - Michel has contributed at both ends of the pitch in recent weeks, The sophomore helped the Sooners limit opponents to just four shots on target in a two win week. She also got on the scoresheet against ETSU(w), driving a shot into the bottom corner from 20 yards out.

D Lindsi Jennings, LSU - Jennings was one of the best players on the pitch as LSU battled for a win over Vanderbilt. She opened the scoring with a neat header, before leading a stout defensive unti that limited chances for the Commodores.

D Danika Austin, Northwestern - The Wildcats have been one of the surprises of the season so far, with Austin playing a major part in that effort. She tallied her second assist of 2022 Sunday afternoon, finding Meg Boade with a well-placed cross.

M Lia Godfrey, Virginia - Her game winner against UNC completed a miraculous comeback from the Hoos.

M Maggie Graham, Duke - The Blue Devils won all three points at the death against Syracuse, winning on a header in the 89th minute. And Graham provided the finish, leaping above her defender to find the bottom corner.

M Felicia Knox, Alabama - The Crimson Tide rolled past South Carolina Thursday night. And Knox was central to that effort, scoring and providing an assist in a 2-0 win. She assisted another goal Sunday against Chattanooga(w).

F Messiah Bright, TCU. - Bright has made scoring goals a formality this season, scoring seven across her first nine games. She resurrected an otherwise disappointing performance from the Horned Frogs, scoring two in a tie with Harvard.

F Izzy D’Aquila, Santa Clara - The Broncos didn’t hold on to their 2-0 lead against Stanford, but it was hardly D’Aquila’s fault. The midfielder scored twice, including one ridiculous volley, to snatch a point.