Women’s Team of the Week: September 24 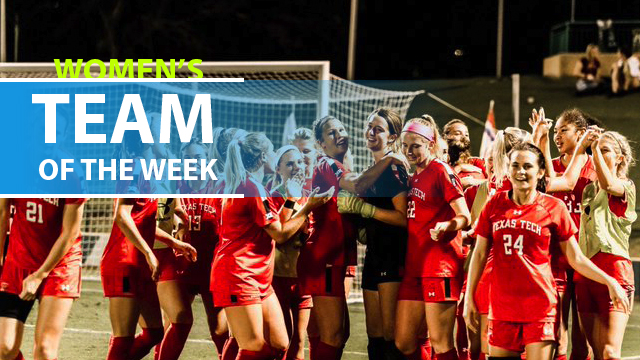 Please send future Team of the Week nominations to college@topdrawersoccer.com every Monday.

On the road, against a ranked opponent, an injury meant it was time for freshman Madison White to make her college debut.

White came into the Texas Tech goal in the 22nd minute with her side up 1-0 on Saturday night against a very dangerous South Florida attack. Six minutes later, her team got another. And while White conceded a goal, she made a total of seven saves and the Red Raiders held on for a 2-1 victory.

Considering the circumstances: coming on miin a tough environment on the road, White is the latest TDS Player of the Week.

The Bulls go for goal on a close free kick, and Madison makes an insane leaping save to keep us in front! 😱

See some of the other top performances from the past week of action in Women’s Division I soccer below.

GK Madison White, Texas Tech – It remains to be seen if White will remain in goal for Texas Tech this week, but Saturday’s college debut was a moment to remember. The Red Raiders begin Big 12 play on Thursday.

D Renee Guion, Clemson – Along with helping the Tigers keep a clean sheet, Guion setup the lone goal as Clemson defeated Notre Dame by a 1-0 score to open ACC play.

D Brianna Alger, Washington State – The Cougars came back from a trip to Hawaii with a pair of wins against Hawaii and Pepperdine. Alger setup a goal in each game and helped the back line hang on to a pair of one-goal leads.

D Madiya Harriott, Vanderbilt – Just when it looked like Vanderbilt and Tennessee were destined for a 0-0 draw, Harriott popped up with the game winner with just 46 seconds left.

M Sarah Stratigakis, Michigan – The Wolverines now have won three straight on the road and four overall after beating Penn State and Ohio State last week. Stratigakis played her part, assisting on the game-winning goal in a 1-0 victory over the Nittany Lions. In a 2-1 defeat of Ohio State, she scored the winner.

M Samantha Dewey, Xavier – Dewey was amongst the goals over the weekend, as Xavier’s strong start to 2019 continued. She scored the winner in a 1-0 victory against Miami (OH) and tallied the opener in a 2-1 defeat of Lipscomb.

M Jimena Lopez, Texas A&M – The Aggies enjoyed a dominant pair of games, including a 3-0 road win against Mississippi State in their SEC opener. Lopez was a force in both wins, scoring a goal in each game and adding two assists along the way. Her ability to find space and get on the ball in wide areas allowed her to create danger with her left foot.

M Jenna Nighswonger, Florida State – In a wild encounter in Tallahassee, Nighswonger continued to fill the score sheet as she scored a brace, including the winner, in a 5-4 win over Boston College.

F Alessia Russo, North Carolina – Russo was efficient in front of goal, finishing her two shots against Louisville as the Tar Heels defeated Louisville by a 3-0 score to open ACC play.

F Evdokia Popadinova, FGCU – Now winners of three straight, Popadinova had a hand in all four of FCGU’s goals the past week. She scored three times and had an assisted as the Eagles defeated Creighton and Marshall at home.

F Cameron Murtha, Wisconsin – A native of Maryland, Murtha helped the Badgers to a successful trip out East to open the Big Ten slate. She was credited with two assists in a 3-0 win against the Terps on Thursday, and scored in a 2-1 defeat of Rutgers on Sunday.