Women’s Team of the Week: September 4 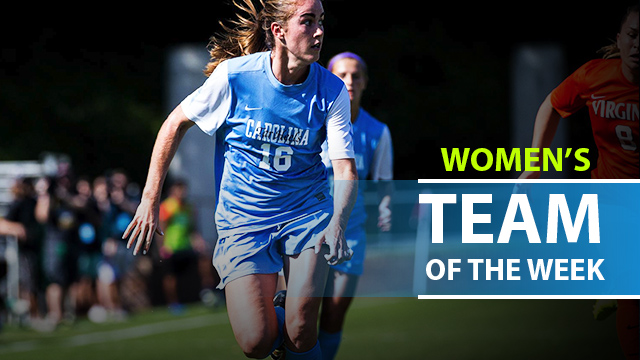 So far, so good for the North Carolina Tar Heels.

Looking to play their way back into the College Cup picture after last appearing there in 2016, the ACC side has won five of its six games played, with just a single draw.

Last week, the Tar Heels topped Providence by a 1-0 score, before cruising past Marquette 4-0. Defender Julia Ashley played a hand in both games, finding the back of the net against Providence, while also scoring and setting up another goal in the win over the Golden Eagles.

Ashley’s performance in the past week earns the latest TDS Player of the Week nod. Check out some of the other top efforts spotted below.

GK Nonie Frishette, Wake Forest – After blanking Michigan last Thursday in a 4-0 win, Frishette was much busier on Sunday, stopping 12 shots as the Demon Deacons picked up an impressive 1-0 win at home against Penn State.

D Gianna Mitchell, Boston College – Another ACC program off to a hot start, Mitchell has already found the back of the net five times. That includes a goal apiece in last week’s shutout wins against Stony Brook and Texas Tech, where she played every minute of the match.

D Alyssa Malonson, Auburn – In road wins against Cal State Fullerton and Long Beach State, Malonson was everywhere, contributing in the defense, midfield and attack. She notched an assist on the game winner against Fullerton and played 90 minutes in the two games, which were both shutouts.

D Julia Ashley, North Carolina – Ashley’s ability to contribute on both sides of the ball was on display once again, as she contributed to a pair of shutouts and helped the Tar Heels continue their strong start to 2018.

D Meaghan Nally, Georgetown – The Hoyas have yet to lose and look as imperious as usual at the back. Nally led the team to shutouts against George Washington and West Virginia, scoring the winning goal in the 2-0 defeat of the Mountaineers on Sunday.

D Ally Prisock, USC – Making the long trip to Florida, USC emerged with a win and a draw against Florida State and Florida. Prisock led the team’s suffocating defense against the Gators, although Friday’s shutout against FSU required a couple of smart saves from goalkeeper Kaylie Collins. Across both games, the senior center back played all 200 minutes.

M Grace Piper, Texas A&M – A defensive central midfielder, Piper had a hand in all three goals as Texas A&M erased a 1-0 deficit to win 3-1 on Friday against Oklahoma. She scored the tying and go-ahead goal from set pieces and assisted on a third with a perfect cross into the box. In Sunday’s 4-0 win against Santa Clara, Piper started and played 44 minutes.

M Meg Halvorson, Denver – The 2017 Summit League Freshman of the Year had a goal and assist in Sunday’s 2-1 win against Columbia at home. She converted a penalty for the first and had a hand in the game winner. She also helped Denver keep a clean sheet in a 0-0 draw against Iowa State on Friday.

F Katie McClure, Kansas – For the second straight week, McClure is back on the Team of the Week. The junior from Kansas scored twice in a 2-1 victory against Utah on Friday. She assisted on the winning goal, the game’s lone strike, in a 1-0 defeat of Butler on Sunday.

F Cory Griffith, Valparaiso – A huge performance from Griffith led Valpo to a 4-2 win against Robert Morris. Griffith scored all four goals, including a perfect hat trick (scoring with a header and both feet), in the victory.