While most of the heavyweights won big in the first round of the women’s NCAA tournament, not every squad could avoid the upset bug.

Previously ranked No. 9 side UCF was the highest ranked team in the TopDrawerSoccer.com Top 25 to see its season end, losing 3-1 at the hands of St. John's on Saturday. This despite outshooting the Red Storm a preposterous 26-3 on the day, as the New York program converted all three of its chances while UCF couldn’t managed more than a long goal. 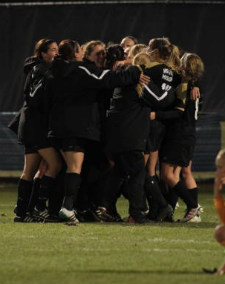 Another Big East program was on the opposite end of an upset, as Marquette, a No. 2 seed in the bracket, lost 1-0 at the hands of Western Michigan. After frustrating their hosts for more than 80 minutes, Aubrey Sudomier struck in the 84th minute, and the Broncos held on for the big win.

The other high-ranked side to slip up was less of a surprise. A formidable force in the rather lackluster Summit League, No. 21 Denver saw its high-powered duo of Kristen Hamilton and Nicholette Digiacomo fail to create against Colorado, as the Buffalos nabbed an 84th minute winner thanks to Anne Stuller.

Most of the rest of the seeded sides managed to roll over the weekend, leaving little of an impact in the rest of the rankings. No. 1 Florida State posted its highest goal-scoring total of the season, getting two goals from Carson Pickett in a 5-0 win over South Alabama.

No. 2 UCLA only needed 43 seconds to put one on the board against San Diego State, as Sam Mewis scored early in a 3-0 win for the Bruins. No. 3 Virginia didn’t need too long against Saint Francis (PA), as a Makenzy Doniak hat trick paved the way to a 5-0 win. The Cavaliers outshot the NEC champions 37-3 finally breaking the bunker thanks to Doniak’s 19th minute tally.

The opening round also delivered penalty kick drama, as Illinois, No. 7 West Virginia, Illinois State and Duke all advanced after battling to draws in their respective games.