The quarterfinal field for the Division I women’s soccer tournament has just eight teams left, after a whirlwind grind of two games in three days to whittle teams down. 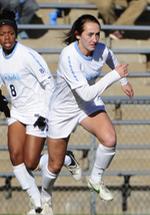 With the number of teams narrowed down, the impact in the TopDrawerSoccer.com Top 25 is minimal, but there are still teams making noise. The ACC reinforced the notion that it’s the best conference in the country with six of the eight quarterfinal sides hailing from there.

It starts with No. 1 Florida State. The Seminoles had little trouble at home over the weekend, notching a 3-1 victory on Friday night against Mississippi, before following that up with a comfortable 4-0 win over Colorado. Midfielder Dagny Brynjarsdottir supplied two of the goals in the win against the Buffalos.

The Seminoles will face Boston College. An offensive outburst saw the Eagles beat both Nebraska and Illinois by the same 4-1 score line. McKenzie Meehan, Hayley Dowd and Lauren Bernard led BC into the quarterfinals, and Friday’s game will be a repeat encounter of a 4-3 classic that Florida State won earlier in the year.

Holding serve at home and shutting out two dangerous opponents was No. 2 UCLA. The Bruins topped Pac-12 rivals Stanford on Sunday night, setting up a quarterfinal encounter against No. 5 North Carolina. The Tar Heels, despite losing star Crystal Dunn to another injury topped Texas A&M 2-0 on Sunday thanks to a pair of Summer Green goals.

No. 3 Virginia ground out a couple of impressive results to keep its season alive. After a dominant 1-0 win against Georgetown on Friday – the Cavaliers outshot the Hoyas 15-1 – UVA topped ACC rivals Wake Forest, led by goals from Morgan Brian and Makenzy Doniak.

Making the trip to Charlottesville next weekend is No. 6 Michigan, which emerged 1-0 winners against a tenacious Notre Dame side. Meghan Toohey provided the game winner, while freshman goalkeeper Taylor Bucklin made four saves in the shutout win.

Another all-ACC clash is slated for No. 3 Virginia Tech’s side of the bracket. Both the Hokies and Duke, their quarterfinal opponents, needed penalties in their respective third round matches. Tech topped Santa Clara 3-1 on PKs in the wake of a 1-1 draw, while Duke advanced past Arkansas 5-3 on PKs after a 2-2 tie.