With the College Cup upon us, Stanford remains at #1 in the TopDrawerSoccer.com women's college soccer Tournament 64 National Ranking this week. The Cardinal advanced to their 5th consecutive final four with a 2-1 win over UCLA.

The ranking is an effort to project the women's college soccer postseason NCAA Tournament field of 64 each week, including the automatic qualifiers from every DI conference. Once the tournament begins, the ranking reflects the actual results of the tournament. 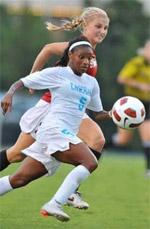 Stanford is followed by Florida State, Penn State and North Carolina, the other qualifiers for the College Cup, to be played this weekend in San Diego.

Meanwhile, North Carolina’s Crystal Dunn is our TopDrawerSoccer.com Women’s College Soccer Player of the Week after she keyed the Tar Heels 2-1 quarterfinal win over BYU in double overtime. Recipients of the honor, along with the entire Team of the Week, are chosen after examining Division I match summaries each week.

D: Kori Chapic, Penn State – Went 90 minutes in the back as the Nittany Lions defeated Duke 1-0.

M: Brooke Elby, North Carolina – Saved the day for the Tar Heels with a sliding save in overtime when BYU had rounded the UNC goalkeeper on a breakaway.

M: Christine Nairn, Penn State – Scored the winner from the penalty spot in the Nittany Lions’ win over Duke.

F: Crystal Dunn, North Carolina – Scored 2 goals including an overtime winner and saved a goal off the line in OT as well.