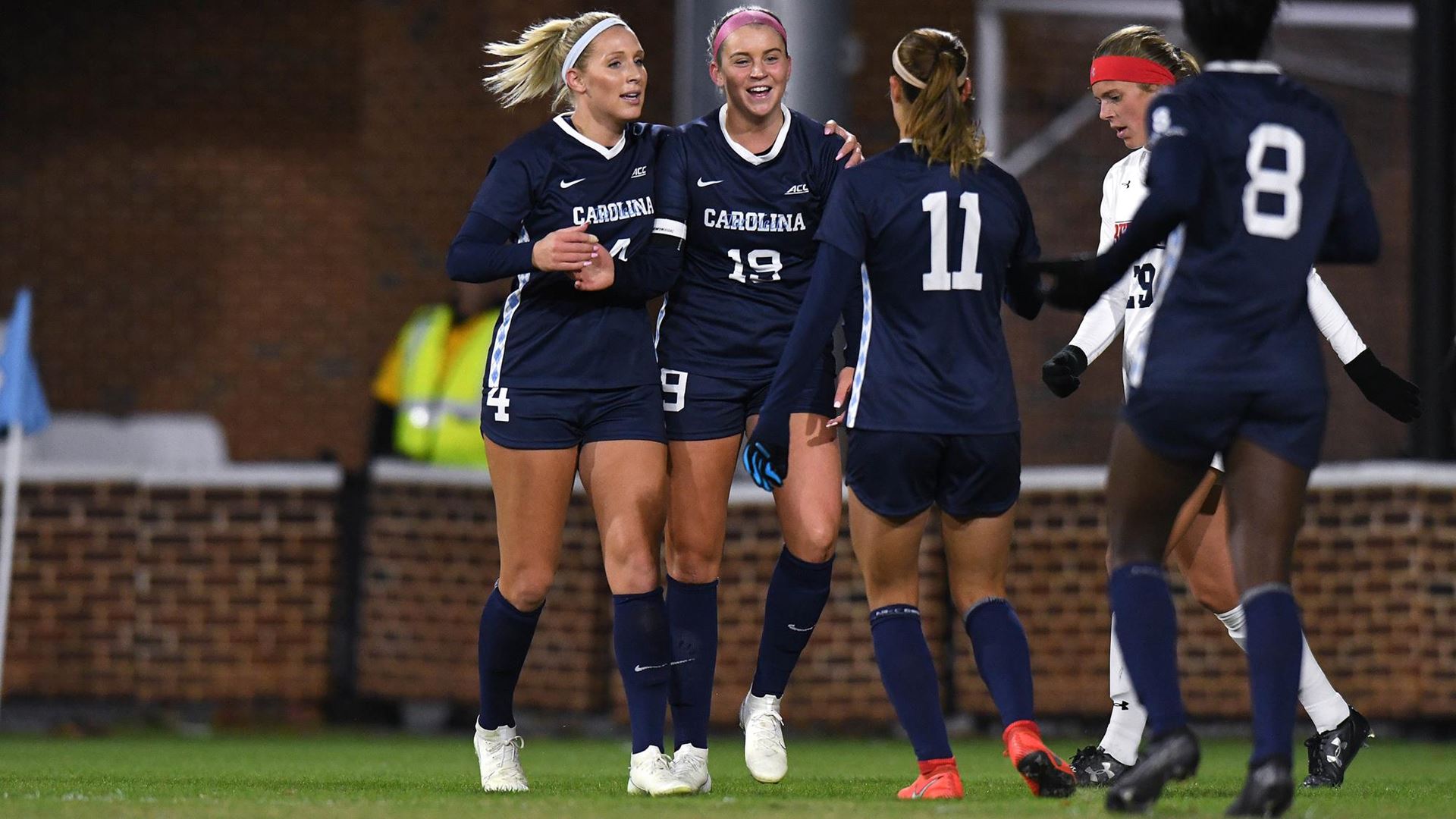 The women’s Division I second and third rounds are slated for this weekend, starting on Thursday in Provo, Utah.

All of the other games are slated for Friday and Sunday, as the tournament field will be quickly whittled down from 32 to eight when the weekend is over.

Preview each pod of games below, broken down by geography.

Action kicks off on Thursday night in Utah, with BYU laying out the red carpet for two ACC sides and an SEC team that will fancy its chances of surviving. Obviously, the No. 2 seed Cougars are the favorites here, with a multi-pronged attack that’s mowed down all challengers in their path. Sure, they could be pegged back a bit for not having the most demanding schedule. But they’ll be the favorites on Thursday in particular against Louisville. The ACC side has to get a good performance from not just Emina Ekic, but someone in the final third to help the Cardinals keep up. Expect Elise Flake, Cameron Tucker and Mikayla Colohan to set the pace in that one.

Before BYU kicks off, NC State clashes against an Arkansas team that will fancy its chances of playing through the weekend. The Razorbacks are well balanced, tough at the back and have several players that can do damage, including Stefani Doyle, Parker Goins and Anna Podojil. They can’t look past a plucky NC State side, that leans on Tziarra King but can sit in and frustrate an opponent, as well as play on the front foot.

The Cardinal enter the weekend as favorites to march through Hofstra and either Penn State or Arizona as the Pac-12 powerhouse looks to be in imperious form. It obviously starts with Catarina Macario, and finding a way to bottle her up is a main focus for the Pride. If Hofstra is to find any kind of joy against Stanford, junior midfielder Lucy Porter is going to have to engineer something special on more than one occasion. Hofstra has shown that it can score goals, sitting at 51 in 21 games. But can the team keep up against the Cardinal?

Friday’s first game should be a cracker as well. The Nittany Lions have picked up pace after a midseason slump, and counts on Kaleigh Riehl and Amanda Dennis to anchor the team defensively, while Sam Coffey looks for space going forward. Stopping Jada Talley, who leads the team with 10 goals and eight assists, is going to be a big task, as the Arizona attack can give Penn State plenty of problems. This one should be close and potentially high-scoring, with the advancing side eager to cause the tournament’s biggest upset in the third round.

It may be late kick off times on the East Coast, but Friday night should serve up a pair of quality clashes. The Duke-Wisconsin meeting is going to be the more closely contested matchup of the two, though Clemson could definitely frustrate the host side UCLA. After falling short of the Big Ten tournament semifinals, Wisconsin bounced back with a 1-0 home win against Wisconsin-Milwaukee. Duke had the more eye-brow raising performance in the first round, pummeling Utah by a 4-0 score at Durham. Breaking down Wisconsin won’t be easy, while Dani Rhodes offers plenty of danger going forward. There’s potential for Ella Stevens and sophomore stars Mackenzie Pluck and Marykate McGuire to cause problems for the Badgers.

The Bruins are humming right along as Clemson arrives to town. They’ve scored four goals per game in three of their past four games, including a wild win against USC. Players are coming back from injury, while Jessie Fleming and Ashley Sanchez are on song. It could be a busy day for Clemson goalkeeper Sandy MacIver, who needs a huge performance to spring the upset. UCLA can be shaky at the back as they look to pile numbers forward, though Clemson has struggled since Maliah Morris went down with injury. Before she was injured against North Carolina, Clemson had a record of 8-1-1. Since that game on October 5, they are 3-5-1, including going on to lose that game against UNC by a 1-0 score. If Clemson can set up shop in front of goal and poach one, the upset could be within reach.

The perils of seeding and plotting out a tournament are on full display in both games here. Despite being the No. 4 seed, Washington has to travel all the way from Seattle to Tallahassee, while second round foes South Florida simply head up state. The Bulls should have every reason to believe that they can pull off the win against the Pac-12 side, especially with Evelyne Viens looking to extend her career at least one more game.

Brown was done no favors either, pitted against Florida State after a tremendous 2019 campaign. The Bears have the defensive moxie that could push the Seminoles, who are possession-dominant side that can struggle to create danger at times. Deyna Castellanos, Yujie Zhao and Jaelin Howell will look to leave their mark on the game, not just by keeping the ball but putting it in the back of the net. If Brown can find ways to spring Brittney Raphino or get a goal from a corner kick, where the Seminoles have been vulnerable, perhaps a shock could be on the cards.

Two upset-minded teams head to Charlottesville looking to extend their season by at least one more game after coming away with road wins in the first round. West Virginia took down Georgetown, while Central Connecticut State was the lone team to beat a seeded side in round one. The two teams clash at Klockner in what could be a low-scoring match. The Mountaineers have senior goalkeeper Rylee Foster, who will look to thwart a CCSU team that boasts two-time NEC Defensive Player of the Year Shauny Alterisio anchoring the team.

It’s far from a straightforward matchup for No. 1 seed Virginia, as Washington State brings a tough and experience group to Charlottesville. Morgan Weaver or Averie Collins can give the Wahoos something to think about in front of their own goal. Obviously, the crucial piece for the Cougars’ upset chances is slowing down UVA’s attack, whether it’s Meghan McCool, Alex Spaanstra, Rebecca Jarrett or Diana Ordonez. Injuries are the lone concern for Virginia, as Laurel Ivory will miss the entire tournament.

An intriguing quartet of teams descends on South Carolina. Can Big 12 tournament champs Kansas continue to win games? Xavier is more than a capable foe of besting the Jayhawks. Notre Dame progressed through against some determined opposition in the ACC, and now seeks to thwart one of the best defenses in the nation. Anna Patten, Mikayla Krzeczowski and Grace Fisk make the Gamecocks favorite for this one.

Two riveting matchups are slated for Los Angeles, as the No. 3 seed Oklahoma State head west for a tussle with Santa Clara. The Broncos remain the likeliest seeded side of continued success, buoyed by a lethal attack keyed by Kelcie Hedge, Kelsey Turnbow and Julie Doyle to name a few. Grace Yochum is unlikely to play, which keeps the pressure on Jaci Jones in jump-starting the offense.

The pick of the second-round matchups is USC against Texas A&M. While the Women of Troy get to host, the attacking duo of Jimena Lopez and Ally Watt can get the Aggies there. Julia Bingham returned to the lineup against Cal State Fullerton, while Penelope Hocking and Alea Hyatt continued to pick up the slack left by Tara McKeown, who remained sidelined. USC has the strength and depth to go with homefield advantage, but will face a big test.

Can anyone thwart North Carolina at home? Colorado gets the first crack at it. And while they have intriguing pieces, such as Taylor Kornieck or Jalen Tompkins. It’s going to take a monumental effort to keep the Buffaloes in sight of the upset, as Carolina is a handful from set pieces and the run of play.

The preceding matchup of the day, between Texas Tech and Michigan has potential to be a good one. As the seeded side, they came through penalty kicks in the opening round against Pepperdine. They’ll have their hands full against Michigan, which can score or create goals through Sarah Stratigakis, Meredith Haakenson and Nicolette Hernandez. Big 12 Player of the Year Kirsten Davis will need to be at their best, to give the Red Raiders a shot at keeping the season alive.