Another October is here, and with it comes a number of crucial women’s Division I college matches. Conference races are still young, but each game is now critical in the power leagues, as SEC, ACC and Pac-12 teams duke it out for regular season championships.

After some early season bumps in the road, North Carolina is settling into a groove at the right time as the Hokies pay a visit to Chapel Hill for a top 10 clash. Winners of five straight, the Tar Heels might not be at their peak yet but have shown the ability to compete with some of the best programs over the past few weeks. Midfielder Joanna Boyles continues to emerge as a scoring option, while Amber Munerlyn and Summer Green look to continue and chip in offensively. In terms of importance, the offense might be needed as Virginia Tech’s high-powered offense rolls into Carolina. 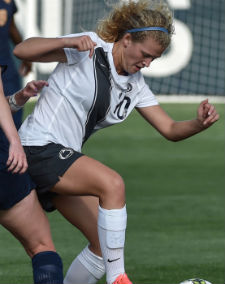 The Hokies lost their first match of the season a week ago to Notre Dame, shut out for the first time in 2014, before bouncing back with a defeat of Duke on home turf. Murielle Tiernan leads the offense with eight goals, but it’s the sheer number of players who can hurt you that makes Tech so dangerous, as 14 different players have accounted for their 40 goals in 12 contests. To contrast it, UNC has just 11 goals in their nine games, though it should be noted have played a much more difficult schedule than the Hokies at this stage of the season.

Another Top 10 clash and contender for game of the weekend features a Florida visit to College Station, Texas, and a potential SEC regular season title decider. This meeting has the potential to be that of a high-scoring variety, as the Aggies’ two-handed monster of Shea Groom and Kelley Monogue have accounted for 19 goals so far this season. Sophomore forward Savannah Jordan leads the team in goals once again and needs to be in fine form if the goals start flooding in from both sides.

A week after hosting Stanford and ending their shutout streak in a 1-1, Utah is back into the Pac-12 fray traveling to Westwood looking to hand the Bruins a setback for the second straight week. Goalkeeper Lindsey Luke came up big in that encounter, and she’ll likely need to do the same against a UCLA team that will be itching to bounce back from a 1-1 draw on the road against Arizona State.

While UCLA has looked a little more human – at least against the Sun Devils they did for stretches – outshooting the opponent 34-10 is a sign that the Utes will have their hands full. This game is the start of five straight games at home for the Bruins, who will look to smooth out any concerns about and try to forge a lead at the top of the Pac-12.

Last weekend’s road trip was just what the Irish needed. A pair of wins against ACC competition away from home likely washed away the disappointment of blowing a two-goal lead at home against the Tar Heels in mid-September. Notre Dame and its standouts of Morgan Andrews, Cari Rocarro and Katie Naughton now deal with the task of slowing down a Virginia side that lost its first game of the season last weekend on the road against Florida State.

The Cavaliers have plenty to prove away from home, showing signs of last year’s dominating side, but have played just three games away from home (Alabama, Samford and Florida State). A win in South Bend would dispel any notion that the Cavaliers are flat-track bullies, as the attack of Brittany Ratcliffe, Morgan Brian and Makenzy Doniak will look to get back on track after getting blanked for the first time this season against the Seminoles.

Similar to other big games this weekend, conference title implications are on the line as the Nitanny Lions visit Madison for a decisive game in the Big Ten title race. Should both teams win Friday night, they’ll enter this game with PSU holding a three-point lead in the standings, and will have the opportunity to extend that lead when they play Sunday. Senior forward Cara Walls is back after missing a couple of games through injury, and she’s combined well with Kinley McNicoll in the attack (both on seven goals) Rose Lavelle and Kodee Williams have shown the ability to create in the final third, with 13 assists between them, while goalkeeper Genevieve Richard is a stable and reliable presence in goal, anchoring a defense that has conceded just four goals this season.

Slowing down an impressive Penn State attack will be no easy task, as freshman Frannie Crause has exploded onto the scene for the Nitanny Lions, scoring seven goals in her first 11 college games. But like other top teams, Penn State has other weapons to hurt you, with Mallory Weber, Raquel Rodriguez and Megan Schafer in fine form. No doubt that if the goal total is high, that it favors the visiting side. Rodriguez should be available for this one ahead of CONCACAF qualifying training camp beginning for Costa Rica very shortly.