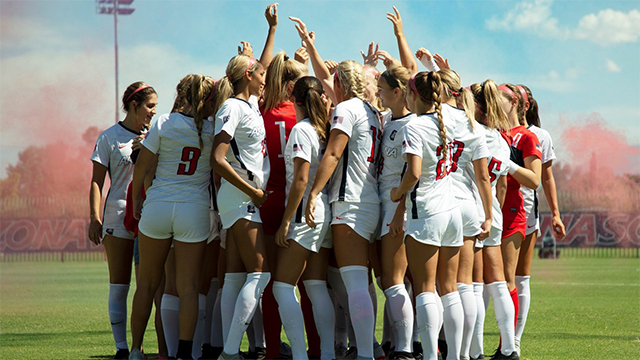 Conference races continue to heat up as the first weekend of October is here. Check out five of the best games to watch (all kickoff times listed EST).

Despite the contrasting overall records, Columbia’s trip south for an Ivy League test with Penn should have significant implications. Through the first two weeks of action, four teams are one four points and Columbia is sitting just ahead of the back with six. The Lions are hungry for success after seeing the Ivy League crown snatched away on the final day last year. Senior forward Rachel Alexander is part of an experience leadership group that looks to erase the disappointments from last year. Penn has yet to concede a goal in Ivy League play and is one of the nation’s top defenses with three goals allowed from nine games. Senior defender Camilla Nwokedi leads the team in minutes played, while junior Kitty Qu’s play in goal has made a statement. Like most games in the Ivy League, there will be little separating these two teams.

After a strong start to its conference schedule, Texas lost and drew two of its first three games in Big 12 play. There’s little reason for panic, although this is almost a must-win game if the Longhorns have hopes of a regular season title. Cyera Hintzen’s a name to watch as Texas looks to succeed without standout freshmen Julia Grosso and Emma Regan. The team has the experience, but whether it can find a way past Rylee Foster is another question. WVU’s season has been, in a way, the opposite of Texas. With a 4-2-3 record in non-conference play, the Mountaineers have navigated to three wins from three in Big 12 action thanks in large part to a tough defense. Easther Mayi Kith has played every minute so far this season, and her leadership and experience at the back is paramount.

The Hoyas are rolling, jumping into the Top 10 and will seek to continue their home form against Villanova. It could be a somewhat tricky matchup, after traveling back from Omaha Thursday night, where the Hoyas crushed Creighton 7-1. Kyra Carusa’s transfer has been a huge addition in the final third, although the team’s defense with goalkeeper Arielle Schechtman is also a big part of their success. Freshman Chloe O’Neill has shown the ability to unlock a defense, and she’ll have to play a significant role, along with sophomore Bri Austin, to come away from Shaw Field with the upset win.

An SEC game gets the national television treatment this weekend, and it’s a critical clash between two programs with conference aspirations. Bunny Shaw’s absence for Tennessee looms large over this one, while Vanderbilt can make a statement by picking up the full points here. Redshirt freshman Haley Hopkins has thrived in the final third, and her contributions on the scoresheet have been a huge part of the Commodores’ success. While Shaw’s absence is worth mentioning, the Volunteers are a tough team to beat in front of Shae Yanez, as Maya Neal continues to excel in defense. Amy Thompson, despite playing in limited minutes, has shown the knack to score in the clutch, and she’ll be one of a handful of players looking to step up as Shaw plays in World Cup qualifying.

This weekend’s Pac-12 action sees Arizona and Arizona State make the trip to Southern California for games against USC and UCLA. Sunday’s match between the Bruins and Wildcats edges the weekend’s picks, as UCLA needs full points to quickly climb up the conference standings and keep their at-large hopes are on steady ground. They’ll be without Hailie Mace and Jessie Fleming, both at the Concacaf Women’s Championship, although last weekend’s 4-0 win against Cal shows that the Bruins can score without that prolific pair. Arizona is on steady ground when it comes to talking NCAA tournament hopes, as freshmen Hallie Pearson and Emily Knous have helped lead the team to a strong start. Sophomores Jada Talley and Jill Aguilera have come through in the clutch, combining for six game-winning goals. Regardless of the stakes, this should be an exciting, high-scoring games.