Two of the top women’s sides in Florida meet on Friday night, with bragging rights and continuing momentum at stake. Both teams should be familiar with one another not just due to geography, but due to the fact that the two sides traveled to Oklahoma last weekend for a pair of matchups against Big 12 programs. The Seminoles continue to boast a strong defense that will look to put the shackles on Savannah Jordan, Havana Solaun and the rest of the Gator attack, while on the other side Dagny Brynjarsdottir leads the FSU offense with three goals so far, and six different goal scorers in total. This should be a close encounter in Tallahassee, and perhaps a preview of an NCAA matchup later this fall. 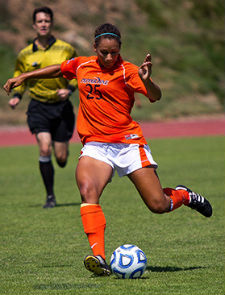 With one win against SEC foes under their belt, the undefeated Tigers have scored 19 goals thus far in 2014 and look to keep rolling against in state opponents South Carolina. Vanessa Laxgang has led the offensive outburst so far with five goals on the year, and she’ll look to crack the Gamecock defense that hasn’t allowed a goal so far this season. Goalkeeper Sabrina D’Angelo, Taylor Leach and the rest of the back line have started the year off in fine form, and will look to shackle the ACC side on home turf.

Two other teams off to fine starts in the 2014 campaign, Friday’s meeting of the Hokies and Hoyas represents the stiffest test for both sides at this point in the season. Freshman Alani Johnson has picked up the scoring slack from the bench, leading the team with three tallies, while usual suspects like Shannon Mayrose and Ashley Meier have also started off strong. The athleticism of the Hokies is sure to trouble the Hoyas, who have also piled up the goals early on through Daphne Corboz and Vanessa Skrumbis.

Honolulu, Hawaii is the backdrop for the meeting between the Waves and Bruins, as the national champs face perhaps their toughest challenge yet in 2014. Seven players have chipped in goals for the Waves so far, led by forward Lynn Williams’ pair of tallies, and will look to score the first goal against UCLA this year. For the Bruins, the defense looks as good as ever, but the attack struggled a bit before coming to life on Sunday against San Diego. Dynamic attackers Taylor Smith and Darian Jenkins will look to get on track, while Sam Mewis has been scoring at a steady pace.

After a bright start to the campaign, the Irish dropped two games straight at home, a development of slight concern to new head coach Theresa Romagnolo. A visit to Palo Alto is going to be no easy task, considering how good the Cardinal have looked through its first three games, chalking up wins against North Carolina, Duke and Portland thus far in 2014. Chioma Ubogagu has delivered in the clutch for the California side looking more and more like it could make a return to the College Cup later this year.

The U.S. U20 WNT’s disappointing World Cup performance is in the past, and the college season is the chance for teams to move on. This weekend, Savannah Jordan has the chance to shine against Kristin Grubka and the experienced Florida State defense. Jordan will need to be at her best if Florida is to best their in state rivals.

For the first time since 2005, Penn State has started the season with three straight wins, and the Nittany Lions are carrying momentum into their first road trip of the season. A visit to North Carolina, which features tests against ACC opposition North Carolina and Duke, is a chance for the Nittany Lions to reinforce their return to the status of national title contenders. The mixture of youth and experience has produced in spades so far, with freshmen like Emily Ogle, Elizabeth Ball, Frannie Crouse, Maddie Elliston and Katy Keen all seeing minutes so far. Delivering in ACC country would be a huge boost for the team this season.