As each day passes, conference schedules draw closer and closer as teams duke it out in non-league action. Fortunately, this also creates some impressive matchups, including the top two teams in the nation squaring off in North Carolina.

Here’s a preview of the women’s Division I weekend. All listed times are eastern. 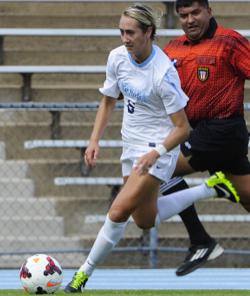 What better way to kick off the weekend than a matchup of the top two teams in the TopDrawerSoccer.com rankings? The Bruins have been on the road for quite some time, having spent last weekend playing a pair of games at Notre Dame. They’ll represent a formidable challenge for the Tar Heels. UCLA’s start under new head coach Amanda Cromwell has been superb, with strong performances led by defender Abby Dahlkemper, midfielder Sam Mewis, forward Rosie White and freshman Darian Jenkins. The Tar Heels of course ooze talent, and will turn to senior stars Crystal Dunn and Kealia Ohai to unlock the stout Bruin back line.

The Cavaliers have been mightily impressive early on in the season, with wins already in the books against Santa Clara and Penn State. Rutgers and Canadian forward Jonelle Filigno (three goals, one assist) has led the Scarlet Knights to four straight wins to open the season, albeit against less impressive competition. A win in Charlottesville – even keeping it close – would send a message to Rutgers’ Top 25 claims. For the Cavaliers, it’s a matter of continuing to do what they’ve been doing behind impressive midfielder Morgan Brian and the rest of a strong team effort.

It’s been slow going out of the gate for these two programs, though part of that can be chalked up to the early schedule. For All-American midfielder Jessie Ayers and the Tigers, the trip to Milwaukee represents an opportunity to claim a top 25 scalp, while Maegan Kelly and the Golden Eagles aim to continue building momentum and avoiding a slip up on their home turf.

The Texas matchup between the former Big 12 foes comes on the heels of the Aggies’ 3-1 loss at home to Pepperdine last weekend. Expectations were pretty high for A&M heading into this campaign, and while it’s too early to panic, avoiding a loss against a Bears squad off to a program-best start is going to be key.  The Bears defense has yet to allow a goal this season and is backstopped by netminder Michelle Kloss, while Ashley York, Bri Campos and Vic Hoffman do most of the damage offensively. The Aggies are going to be a handful offensively behind Kelley Monogue, Liz Keester and Allie Bailey.

After a draw last weekend on the road against Stanford, the Pilots are back on home turf and welcome an ACC power, looking to replicate last season’s upset of North Carolina. The Demon Deacons should be well rested for the pair of upcoming games after Sunday’s game against Louisville was postponed. Stopping senior forward Katie Stengel (three goals, three assists) is going to be the focus for the Pilot back line, as most of Wake’s offense tends to gravitate toward her. Freshman forward Danica Evans is still looking for that first collegiate goal, and she’ll look to make things happen up top along with Emily Sippel.

It’s always a challenge to hop across the country and face top-tier opposition. That’s what’s on the docket for Maryland this weekend, with a California road trip taking them to Santa Clara and Stanford. The Terps are far from the only team to go on a long road trip – UCLA and Wake Forest are as well – but in the crowded ACC, this is a chance to make noise behind an impressive offense led by senior Hayley Brock. If they can come away with at least one win, it should bode well for head coach Jonathan Morgan’s team.