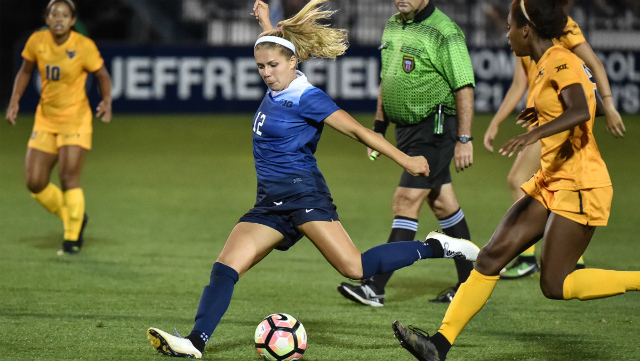 Another weekend of the women’s Division I serves up a big round of clashes.

Before dipping into the top five games, there was a significant upset on Thursday night, with another top team falling.

No. 4 Virginia fell 1-0 in double overtime against Wisconsin, thanks to a late goal from Dani Rhodes. The Cavaliers outshot the Badgers 10-7, though both sides managed three shots on frame.

Keep an eye on this slate of games over the holiday weekend.

While it’s been a sluggish start to the season for the Cougars – which is understandable given the attacking talent they lost – playing at home turf is usually the equalizer that produce results. Welcoming UCLA on Friday night will be a tough test of that, as a young Bruins side is flying out of the gate. Through the first four games of the season, UCLA has scored 17 goals, as both Hailie Mace and Julia Hernandez have four apiece. Jessie Fleming pulls the strings in midfield, while a flood of freshmen, including Ashley Sanchez, Delanie Sheehan and Olivia Athens. Defense has been a weak point, something that Nadia Gomes will surely look to exploit, but it is notable that BYU has scored just two goals from its first three games.

The Hoyas face a steep challenge in this Top 10 clash, looking to take revenge for last season’s 3-0 loss to the Cardinal. After losing on opening day at home to West Virginia, Georgetown’s rolled through their past three opponents by a combined score of 10-0. Stanford offers a much different look than Loyola (MD) or George Washington, of course, and the focus for the Cardinal will be on slowing down Rachel Corboz. The clash between Corboz and Stanford midfielder Andi Sullivan is sure to be a focal point, as Corboz could certainly make a statement if she can make things happen against Sullivan and Tierna Davidson. Freshman forward Catarina Macario is another youth star off to a strong collegiate start, sitting on four goals through the first three games of the season. While the Hoyas are going to be a tough out, the combination of a cross-country flight and a Stanford team looking to bounce back from last week’s loss makes the Cardinal heavy favorites.

Whenever these two teams meet, there’s generally little that separates them, as Penn State has won seven times, West Virginia six, and two draws in 15 previous encounters. That includes last year’s 1-1 draw at Jeffrey Field in State College. This year, the focus is on Morgantown as Penn State seeks to continue a strong start to the season. Penn State’s looked as lethal on the field as they do on paper so far, as offensive contributions coming from Marissa Sheva (4 goals), Megan Schafer (1 goal, 3 assists) and Charlotte Williams (3 assists). The depth is impressive at both ends of the field, as senior striker Frannie Crouse hasn’t even been that central, scoring just one goal so far. The Mountaineers have another chance for an early season win against a ranked opponent, after defeating Georgetown on the first day of the season. Obviously West Virginia came up short last week against Virginia, though with Michaela Abam and Carla Portillo, have plenty of ways to test a very good Penn State defense.

It’s been a ho-hum start to the season for the Irish, which hosts Santa Clara to wrap up the Notre Dame Invitational. Notre Dame’s offense failed to fire in the first game of the reason, a relatively disappointing draw at home against Butler. A road trip to Minnesota yielded the other non-win of the season, a 1-1 draw last weekend. Sophomore striker Jennifer Westendorf looks to be picking up where she left off last season, with two goals and three assists. Natalie Jacobs has scored twice as well, and the pair will look to continue to hone a partnership in the final third. On the other side, this matchup is another tough matchup for Santa Clara, which has already faced big tests against Pac-12 powers California and UCLA, losing in both. Winning at least one game on this weekend trip isn’t necessarily a must, but losing two straight is going to halt any chance the team has of building momentum.

The other matchup on Sunday in South Bend is a big test of this ilk for both teams looking to get sharp before the conference races heat up. Putting the shackles on South Carolina star Savannah McCaskill is one of the keys for a Wolverine defense that’s conceded just one goal in its first four matches. Heading on the road to tussle with the Gamecocks in South Bend provides a nice cushion, though this matchup will come on the heels of a Friday night test against Santa Clara. As long as Michigan emerges unscathed and Taylor Timko continues to make things happen in front of goal, the Big Ten side could have another big win under its belt.