It’s perhaps the biggest test of the season for #1 Florida State after what has been a dominant run this far. With three ACC games remaining, the Seminoles travel north over the next few days. Thursday features a stop to take on #25 Boston College, followed by a stop in College Park, Md. for a matchup against #13 Maryland. Riding a 14-game winning streak at the moment, it’s hard to know if either of these ranked foes can slow down the Seminoles. 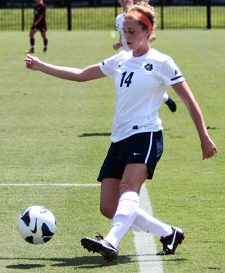 Home cooking has been favorable so far for #2 Stanford, and the defending champions wrap up the regular season slate in Palo Alto this weekend with a pair of Pac 12 matchups. Washington State pays a visit on Thursday, while the #31 Washington Huskies present an even bigger challenge on Sunday.

Hoping to keep pace with the Cardinal before the two sides meet during the final weekend of October is #3 UCLA. A team that jumped out to a quick start this season and has yet to let up – or lose, for that matter – will begin four-game home stand this weekend as Colorado and Utah pay a visit to the Los Angeles area.

This coming weekend is set to dictate the Big Ten conference regular season winner, as #4 Penn State looks to make yet another emphatic statement at home. Michigan State and #20 Michigan arrive in State College, with the latter having an outside chance at the Big Ten regular season crown. That Sunday matchup is set to particularly compelling because of the statistical trends of the two sides: Penn State leads the nation in goals scored per game, while Michigan’s defense ranks fourth overall in goals allowed per game. Something’s got to give, and it likely will.

Because of the Big East tournament about to start, #5 Georgetown wraps up its regular season schedule on Friday with a road trip to the Philadelphia area to take on Villanova. There isn’t much at stake for the Hoyas on this journey, as the team has already sewn up the top seed in the National Division thanks to the results from over the weekend, but needless to say the team is looking to finish strong.

In any sport in the ACC, a Duke-North Carolina game is always circled on the calendar. And it’s no different as the two teams line up to face each other in Durham on Thursday evening – plus there’s the added stakes of ACC standings. Carolina trails the Blue Devils in the standings by four points, and Duke has played two more conference games during that stretch. If the Tar Heels can come away with full points on the road, it would be a big step up the ladder.

It’s a huge, huge weekend for Michigan. As previously mentioned, the Wolverines take on the Nittany Lions on Sunday. But that meeting might not carry the same stakes if the visitors can’t take care of business on the road prior, as they’ll make a pit stop at Ohio State on Thursday evening. Two huge games for a program that has already surprised this season.

As the season winds down – and it is far from over, of course – the chase for the top scorer in the nation truly heats up. Right now, three players are tied for the lead with 16 goals, Daphne Corboz (Georgetown), Stephanie DeVita (Furman) and Taylor Uhl (Minnesota) will continue the chase for that honor while also taking care of business from a results perspective. A few players sit one behind on 15 tallies: Jen Hoy (Princeton), Ramey Kerns (East Tennessee State) and Laura Weinberg (Duke) are all well in the mix.

Along with the Duke-North Carolina meeting, the ACC has plenty of other intriguing games as well. Among those is an important tilt of Virginia vs. Virginia Tech provides not only a rivalry game, but also an opportunity for both to climb the conference ladder.