Some of the perennial favorites in women’s college soccer, such as UCLA, North Carolina, and Santa Clara, will start the season with a proverbial hand tied behind their backs..

Due to some unfortunate scheduling, the FIFA U20 Women’s World Cup, which will be held in Japan from August 11 to September 8, directly coincides with the start of the 2012 college soccer season. 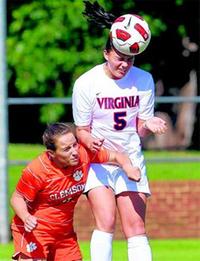 This leaves programs across the country in a difficult place, as they are forced to plan on not having their star players for the start of the season, but then likely welcoming those players back at the midway point right before conference play starts.

One program is in an especially tricky place as its head coach will also be absent for that stretch.

Virginia head coach Steve Swanson is also the leading man for the U.S. U20 Women’s National Team, which means he will be absent for the start of the season, but the Cavaliers seem to have it under control.

“Hopefully, it is a seamless transition,” assistant coach Ron Raab told TopDrawerSoccer.com. “[Swanson] has been with the 20s pretty much full time since January, which should make the transition easier in the fall.

“It will be a challenge, but won’t be as dramatic as in previous installments where the World Cup came at the end of the season.”

Virginia will likely have a player or two missing to start the season too with Morgan Brian, Olivia Brannon, and incoming freshman Makenzy Doniak all called into the U20 WNT training camp in Florida this month.

“Obviously, those are great players,” Raab said about the possibility of Swanson taking all three of them to Japan. “There is a reason we recruited them to Virginia. They have an opportunity to play for their country, and it will let them become better players. We are big supporters of our players playing on the international level.”

Raab doesn’t anticipate any of them to take a red shirt year with the long absence away from class and the field, but that may be reassessed when the return date is near.

“We have to see,” he said. “From a timing stand point, they will miss the non-conference portion. It is not ideal, but not as bad as previous cycles.”

In 2008, the U20 World Cup was held from November to December, which kept star players like Sydney LeRoux, Meghan Klingenberg and Alex Morgan off the campus and in the Stars and Stripes.

This year, the players are jumping back in for conference play, which does have some pitfalls with integrating players into the mix but it is a risk programs are willing to take.

Santa Clara’s coaching staff is planning on integrating Julie Johnston immediately back into the lineup when she returns from the World Cup, which is the same stance of many programs are taking prior to the season.

It is a wait-and-see mentality that the college teams are forced to plan for while they assess what players can step up and fill roles, and speculate on just how long the U20 WNT players will be gone.