A fluke first goal in the 15th minute put West Virginia up early.  The biggest impact was to the confidence of the young Virginia Commonwealth team.  The play started with Moeryhan “Peabo” Doue getting the ball wide to Nick Claudio who took several touches before crossing it back to Doue 15 yards from goal in line in line with the near post.  Doue’s intended shot gently floated to the far post where Travis Pittman ran onto the “floating butterfly” and touched it in from 4 yards.

In the 18th minute, Abel “Shadow” Sebele hit a rocket from the top corner of the box.  The play started with Claudio taking a short corner to Sebele who drove to his spot and unleashed a powerful strike. 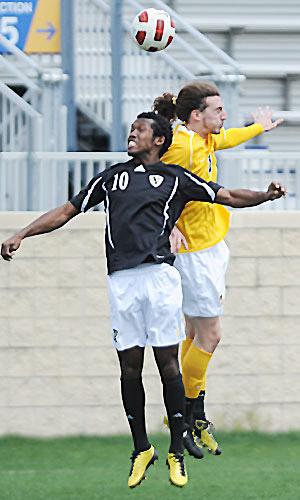 WVU's Travis Pittman (yellow) battles against VCU.
Above, I mentioned that Virginia Commonwealth didn’t cover the short corner effectively.  Part of the Virginia Commonwealth defensive quandary is that West Virginia tactically uses Eric Schoenle as an effective target on corner kicks.  By faking a short corner, teams must come out to protect that option opening space in the box for Schoenle.  It’ll be interesting if West Virginia can find a third option for the fall.

The final goal was scored in the 87th minute by Sebele from a penalty kick.  Sebele earned the penalty by calmly holding the ball in the box rather than taking a rash low percentage shot – which he was more apt to do last year.

Sebele can be a dynamic sensational player reminiscent of Darlington Nagbe.  He’s that good.  He needs to demand the ball more and become the linchpin to generate the West Virginia attack.  If he does, West Virginia has a chance to become a very good team in the fall.

Another special player is center back Eric Schoenle.  Besides being a target on set pieces with his height, movement and deft feet, he’s an outstanding defender.  He’s so active that his center back partner Uzi Tayou seems to be able to hang around holding Schoenle’s extra boots.  Schoenle serves a sweet accurate long ball. Is he the best center back in college?  Maybe. Austin Berry (Louisville), Ibeagha brothers (Duke), Matt Hedges (North Carolina), Shaun Foster (Hofstra).  Hmmm.

Uwem Etuk has gotten much stronger. In the 65th minute, he crushed Nate Shiffman in the open field. In the 22nd minute, he exploded through the box, but he wasn’t able to connect on the cross.  Etuk needs to receive the ball cleaner and quicker.

Several years ago, I noted that Travis Pittman was immature and petulant missing the big picture of results and effectiveness.  I’m happy to see that Pittman has grown, keeping his game tight but under control.

Replacing graduated senior goalkeeper Zach Johnson is going to be critical for West Virginia’s success in the fall.  Heir apparent Paul Killian didn’t play.  Charlotte transfer Pat Eavenson had 3 starts in 2010.  Eavenson was adequate but didn’t win the position with his play against Virginia Commonwealth.  He called for the ball and didn’t get to it.  This is a pet peeve of mine.

Francis Molasoko is a physical player that had problems with the quickness of Rich.  Molasoko has speed, but might be better suited in the middle.  He’s pretty raw and having the spring will be an enormous help for him in the fall.

Gaddis didn’t attack enough especially given his defensively weak opponent.  His passing continues to improve.  Gaddis wasn’t challenged defensively.  I would have liked Gaddis and Molasoko to switch to have a better defensive match-up.
Headlines
College Rankings HQ
View all rankings >>