MORGANTOWN, W.Va. – New Zealand is a country where fearsome sporting behemoths like Jonah Lomu and Tana Umaga are feted for their exploits in the All Black jersey of the country’s storied rugby union team.

Wellington, hemmed at the southwestern tip of New Zealand’s North Island by the Rimutaka mountain range, is the world’s remotest capital city and a place where soccer is largely considered a girls’ sport. 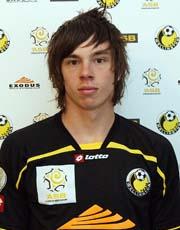 The trio are among the burgeoning crop of Kiwis trying their hand at a college soccer career in the United States. Los Angeles Galaxy’s Dan Keat and former Richmond Kickers midfielder Tim Brown are among their predecessors who have returned to the Land of the Long White Cloud to spread the word to their countrymen.

“They’ve come and talked in seminars, promoted it and said it’s a good pathway for players to take,” said Cain in an interview with Top Drawer Soccer.

“You’ve got the option of the degree as well, which for a lot of parents in New Zealand is a big thing,” Cain said. “They see it as a good road for their kid to get an education as well as play the game.”

The trail to the NCAA began when former All Whites Head Coach Bobby Clark joined Stanford in 1996 and recruited Simon Elliott and Gerard Smith, players that he’d become familiar with during his time in New Zealand. Ryan Nelsen and Michael Wilson followed thereafter.

All four players went on to represent their country at the full international level. Elliott and Nelsen reached the English Premier League, and they were among seven U.S. college grads representing New Zealand at the 2010 World Cup in South Africa.

“The schooling system is very good in New Zealand, so they have no problem fitting in to the American college system,” said Notre Dame Head Coach Clark in a telephone interview. “The language is no problem, and the big thing was there was no professional league.

“Whereas your top players in most other countries were professionals, really good New Zealand players were still amateurs,” Clark said. “They still had their eligibility untapped.”

Three ties at the World Cup in South Africa, notably a 1-1 result against Italy, ensured that New Zealand ended the tournament as its only unbeaten side and stoked a patriotic fervor usually reserved for the egg-shaped ball game.

“Everyone was jumping on the bandwagon,” Cain said. “Even the rugby fans were getting involved, getting up early in the morning to watch the games. Everyone was interested in seeing the national team do well.”

Those spurts of success have helped soccer’s growth in the country of 4.4 million inhabitants. The number of youth teams has sprouted, according to Cain, though New Zealand still lacks a fully professional league. Wellington Phoenix joined Australia’s A-League in 2007 and the franchise has an alliance with Team Wellington of the ASB Premiership, an eight-team semi-professional league founded in 2004.

Cain started his collegiate career as West Virginia’s central striker in the Mountaineers’ 2-1 win over Hartford on Aug. 25. His debut will ultimately be remembered for his first ever red card following a tame second booking on 86 minutes for kicking the ball away.

“It was a bit disappointing,” Cain said. “There was a bit of a misunderstanding and I never heard the whistle.”

“He was arguably man of the match,” LeBlanc said. “His movement was fantastic, his work rate was excellent, and he held the ball up for us.”

Cain returned to the front line alongside Bevin in West Virginia’s trips to North Carolina and Wake Forest last weekend. Back-to-back 1-0 losses left the 19-year-old striker still waiting to notch his first goal of the season. LeBlanc believes that will arrive soon, once Cain adjusts to the quickness of the college game.

“Once he gets that opportunity to shoot the ball, he’s got to pull the trigger,” LeBlanc said. “I think he just wants to set it up a little too perfectly.”

Cain’s next opportunities to find the net come Thursday evening at Penn State and against Oakland Sunday when WVU returns to Morgantown’s Dick Dlesk Stadium.