Xavier looking to compete in crowded A-10 With the way the conference landscape of college athletics has been shifting and changing, it’s a dizzying exercise to keep pace with what teams are where, even in the middle of the college soccer season.

The current merry-go-round has left the Atlantic 10 loaded with a number of strong mid-major programs, and it’s the conference where an undefeated Xavier side (7-0-2) hopes to contend heading into the A10 portion of their schedule.

“We have a veteran team back from last year, and a team that had some success,” Fleming told TopDrawerSoccer.com. “But I think quite frankly we left something on the field at West Virginia [in the NCAA Tournament], giving up a restart goal in overtime, ending it that way.” 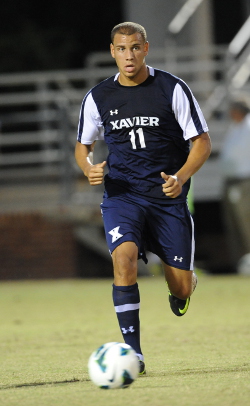 The start to the season certainly has been notable, but Fleming is looking ahead to Atlantic 10 action beginning this weekend with a pair of tricky matchups against Saint Louis and Butler.

“I’ve always said, prior to this year, we’re not the best conference in the country, but I think you’d be hard pressed to find one with more parity,” Fleming said. “Every year, up until the final game of the final day, there are four or five times jockeying for the final playoff spot…you take that into account and you add Butler and VCU, add the emergence of Charlotte and the return of Saint Louis and all the other teams involved, and that makes it tough.”

It didn’t always look like Xavier was destined for such a strong start. After drawing and losing a pair of preseason games, the first game of the season on the road against Northwestern provided a massive challenge. Up 1-0 in the dying minutes, the Musketeers conceded a PK with nine seconds remaining. The game eventually ended in a draw, and it wouldn’t have been surprising to see the team react poorly.

Instead, Fleming was pleased to see his team bounce back from what could have derailed the season early on, winning six games out of the next seven, with the only other result a 1-1 draw on the road against Virginia.

“Rebounding from that, to have the start we had, if that’s your first punch to the face so to speak, first memory on opening night, in a big game, a place where I used to coach, and a big RPI game for us, considering that’s what we went through our first game I think we’ve settled in nicely, regrouped nicely and responded nicely,” he said.

The recipe for early success has far has been the combination of a good enough defender – Xavier hasn’t conceded more than one goal on the year – with an efficient attack, the goal tally is already at 20 on the season.

That marks as sharp contrast to seasons past.

“The first two years [I was here], especially the first year, we would just try to shut teams out, or hold them to one goal, and pray we could score one,” Fleming said. “And now we’re already at 20 goals so far. No one’s scored more than a goal against us, and very rarely do we allow more than one.”

Leading the team offensively has been senior forward Luke Spencer, who already surpassed his season high with 9 tallies on the season. Matt Walker has gone from being a consistent starter to an offensive spark plug off the bench with 4 goals and 5 assists, while Will Walker and Tanner Petrick provide depth in the midfield.

Life in Atlantic 10 isn’t going to be easy. Along with the conference’s growing depth – the recent additions of VCU and Butler further emphasizing that – teams mostly play games on Fridays and Sundays, adding a unique format that programs must deal with in order to excel.

Embracing that schedule is one of the keys to A10 play, according to Fleming.

“You need a little bit of everything, but the main thing is having resilience whether you win or lose on Friday to get back up on the horse Saturday morning, get training, get ready for Sunday,” he said.

Fleming keeps his team grounded in their approach to games as well. Instead of setting huge goals, he breaks the season up, and likes to discuss simply winning each game in halves. That surely won’t change as the Musketeers look to take their non-conference success to the A10.

“The biggest we get with the scope is we talk about breaking the schedule into six 3-game series, and hoping we get at least two wins in each three game series,” he said. “Our only goal we have is maybe A10 playoffs. You can’t make the NCAA tournament if you don’t make the A10 playoffs. I think some programs look at an 18-game schedule or at an NCAA championship, they kind of get too far ahead of themselves and they look too big.”