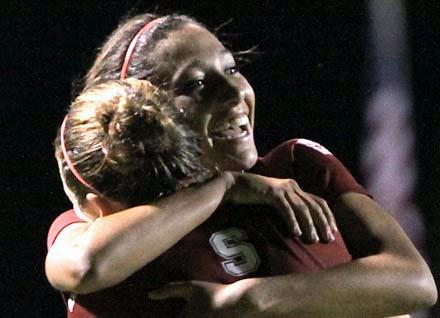 Stanford duo Kelley O’Hara and Christen Press are the TopDrawerSoccer.com Women’s College Soccer Co-Players of the Season for 2009, following their standout work as part of the Cardinal’s 20-0-0 regular season. 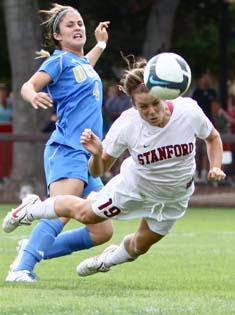 Kelley O'Hara (Photo courtesy of Stanford Athletics)
The tandem highlight the publication’s annual Team of the Season and All-Rookie Team, recognizing the leading upperclassmen and freshmen in women’s college soccer this year.

It seems a bit forced to recognize one of the forwards and not the other given their body of work over the season thus far. O’Hara, a senior from suburban Atlanta, scored 23 goals and recorded 9 assists, while Press, from Orange County, California, scored 16 goals and added 13 assists.

Stanford coach Paul Ratcliffe said that the players were integral to one another’s success, noting that this sort of chemistry and teamwork was instrumental to the success of the entire team, individually and collectively.

Press, a cool-as-can-be penalty box assassin, agreed that she and O’Hara improved on their already-good working relationship this season.

“It definitely was even better (this year),” she said. “After two years of being together we had just a little more experience, a little more chemistry. We were both going full force this year and teams know now they can’t just mark her or just mark me.” 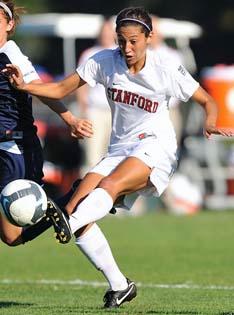 “It just comes from the fact that we’ve had three years to play together,” she said. “We’ve been able to play with the U23 National Team as well and practicing day-in-day-out with Lindsey (Taylor) as well has helped us to have a really good connection on the field. During games we’ll give each other a thumbs-up, just reassuring each other that we might not have a goal yet, but we’ll put something together and make it work.”

Of the 20 wins enjoyed by Stanford so far this season, only three of them didn’t include either Press or O’Hara scoring a goal.

Which is not to say they did it on their own. Cardinal defender Ali Riley is also in the TDS First Team, while freshmen Rachel Quon, Alina Garciamendez, Mariah Nogueira and Courtney Verloo are in the All-Rookie Team (freshmen are not ineligible for the Team of the Season), signaling a total team effort this year in Palo Alto. 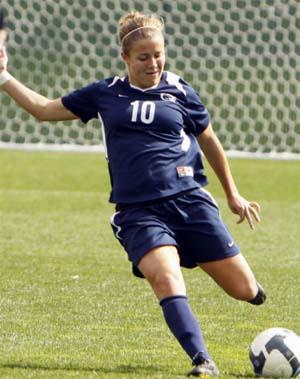 Christine Nairn (Photo courtesy of Penn State Athletics)
The tough news for Stanford opposition, according to Press, is that the team hasn’t played its best soccer yet.

“20-0 is amazing, but I wasn’t always satisfied with the way we played,” she said. “We showed the team we could be at times, and obviously we’re playing well, but we have a lot more to give.”

The Rookie of the Season award was a tough choice as there were a number of standout freshmen in the women’s college game this fall, but we went with someone who put off her rookie year by a season due to the U20 Women’s World Cup last year. Penn State’s Christine Nairn led the Big 10 in assists and was 4th in scoring, but the totality of her contribution is not measured in stats. This two-way midfielder makes an impact on every game she played, despite recovering from mono at the beginning of the season.

Co-Players of the Season: Kelley O’Hara and Christen Press, Stanford