This is the first in a series of daily articles previewing each men's and women's college conference.

Penn State has been a constant in Big 10 Women’s Soccer, and they look to be prominent in this year’s title reckoning as well.

The Nittany Lions will have to overcome the loss of offensive standout Katie Schoepfer and all-everything goalkeeper Alyssa Naeher. Returning is TopDrawerSoccer.com Rookie of the Year Christine Nairn along with speedy forward Danielle Toney.

Speed is something head coach Erica Walsh is bringing in in droves this fall. Standout forwards Maya Hayes and Hayley Brock will debut, along with outside back Briana Hovington, as the squad looks to claim its 13th conference championship. 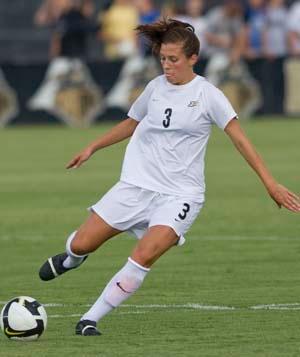 Liz Secue (Purdue)
But nobody else in the league is ready to coronate Walsh’s team just yet. Her predecessor at Penn State, Wisconsin coach Paula Wilkins, took a team to the round of 16 in last year’s NCAA Tournament in just her third year in charge at Madison.  Midfield standout Alev Kelter, goalkeeper Michele Dalton and leading scorer Laurie Nosbusch will back for the Badgers.

Purdue will also look to mount a title bid. Rob Klatte’s Boilermakers suffered a shock loss to Central Michigan in the opening round of the NCAA Tourney. The team will look for offense from newcomer Vanessa Ibewuike. Goalkeeper Jenny Bradfisch also returns.

Lori Walker’s Ohio State Buckeyes come off a 14-4-2 campaign, but also lost in the first round of the NCAA. Lauren Granberg, Paige Maxwell and Lauren Steuer will provide the goals, with Tiffany Cameron, Cassie Dickerson and Courtney Jenkins bringing the guts and goo.

Alexandra Kapicka returns in goal for Illinois, which will be looking to rebound from something of an off year. Janet Rayfield’s squad welcomes goal-scoring talent Janelle Flaws to the forward line, along with freshman midfielder Vanessa DiBernardo. Julie Ewing, Danielle Kot and Krystin  Miller return for the Illini.

Ron Rainey’s Iowa Hawkeyes were a fun to team to watch last season and scored a lot of goals. Morgan Showalter, Alyssa Cosnek and Keli McLaughlin are all back to provide more scoring, with Ashley Catrell joining the squad as well. Katie Nasenbenny is a key newcomer in midfield, while Jade Grimm, Jenna Aleo and Rachel Blakesly return in the back line. 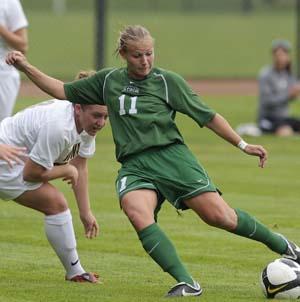 Laura Heyboer (Michigan State)
Minnesota was unfairly kept out of the NCAA Tournament last year, but Mikki Denney-Wright’s squad will be strong again this fall. Katie Bethke, Molly Rouse and Tamara Strahota all return to lead the offense, and Cat Parkhill is one of the top goalkeepers in the nation. Shari Eckstrom returns in midfield and Kylie Kallman in the back line.

Indiana will also feel a bit left out when it comes to last year’s NCAA Tourney field. Mick Lyon’s squad went 8-2-1 at home but struggled on the road and in conference play. Lisa Nouanesengsy leads a talented freshmen class, while Lindsay Campbell brings an impressive 0.57 GAA back to the IU net. Devon Beach and Carly Samp also return.

At Michigan, Greg Ryan’s revolution endured some tough sledding in his first two years, but now he should start to see the fruits of some of his recruiting efforts. Kayla Mannino, Shelby Chambers-Garcia, Meghan Toohey and Tori McCombs headline a 9-player recruiting class, en route to join returning starters Holly Hein, Jackie Carron, Courtney Mercier and Clare Stachel, who is returning from an injury that kept her out for all of last season.