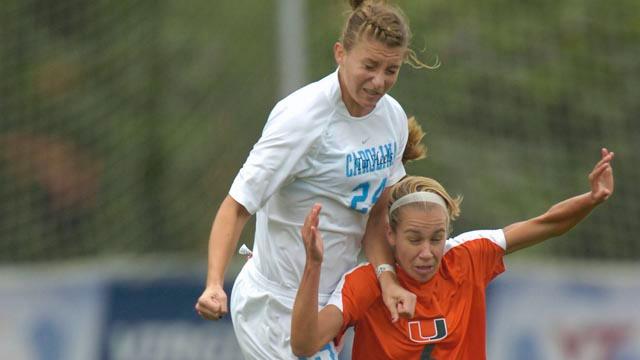 Ulcerative Colitis is an inflammatory bowel disease that commonly leads to heavy exhaustion, dehydration, and weight loss. It can also potentially cause joint pain, nausea and vomiting. Now for the average person, any single one of these symptoms would raise a red flag and would be cause of worry.

But if you’re soccer player, the effects of having ulcerative colitis can possibly hinder your ability of ever doing the thing you’ve loved all your life, and question that invincibility factor that a lot of athletes subconsciously have.

This was the case for Rachel Wood. She is a standout soccer player hailing from Laguna Niguel, California, now a starter for the University of North Carolina. Rachel committed to UNC with the aspirations of attaining the dream of a college athlete, a national championship. And in her freshmen season, playing as a midfielder, she helped the Tar Heels capture the 2008 NCAA Women’s National Championship, even scoring twice in post-season play. 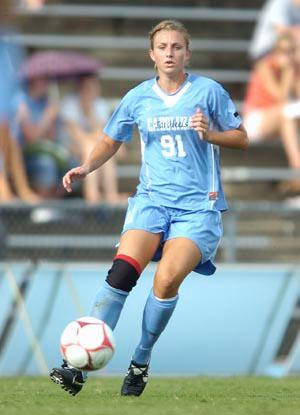 Rachel Wood
With the soccer season concluded, Rachel who is a Biology and Pre-Med major trying to follow her fathers footsteps in becoming a doctor, started to feel ill in the spring semester.

As Rachel explains, “For a while I didn’t know what was wrong. I started getting some weird stomach problems and was flown home. I questioned if I was making this all up.

“I was flown home in April with a tentative diagnosis. I finished classes in May and at that time I didn’t want to say anything. I left school without anybody knowing, wanting to take the summer to recover and go back in August.”

However Rachel’s summer didn’t include any indication of her reaching full recovery. By the middle of the summer she started to have some impediments in her recovery and upon further testing, was diagnosed positive for tuberculosis and later ulcerative colitis.

“With all these complications, I knew I couldn’t go back to North Carolina and play, I couldn’t even climb a flight of stairs without getting exhausted,” added Rachel. “So I wrote and e-mail to the entire staff, coaches, trainers, my teammates and their families, explaining why I wasn’t returning for the 2009 season.”

Back on the soccer field at North Carolina, the girls had to continue playing, never forgetting the missing warrior that was fighting to get back to the confines of Fetzer Field.

“Coach [Anson] Dorrance was very supportive, and allowed me to have a medical redshirt my sophomore year,” said Rachel. “I would consistently get calls and e-mails from my team and their families, asking how I was doing and sending me messages for support. They were very helpful. I was sad but relieved because I felt that there wasn’t any pressure.”

With the thoughts of her athletic obligations to North Carolina on the backburner, Rachel was able to concentrate solely on recovering.

“At the beginning it was all up in the air, I didn’t know how to control the disease,” said Rachel. “I ended up seeing a specialist at Cedar Sinai Hospital in Los Angeles, and he was very optimistic that with the help of medication, I would return to my same form, if not better.”

With the illness medicinally in check, the aspect of her athleticism was in question. Not being active an entire season, in any sport, is very detrimental to the overall performance of an athlete that wants to return to action. Sometimes never being able to return, other times not coming back the same.

Doctors may have told Rachel that she could come back better than ever, but ulcerative colitis is something one has to cope with day in and day out. And Rachel was doing all she can during her year off to not have the setback that one would expect, both physically and psychologically.

“I was in bed for three months and ended up seeing a cognitive behavior therapist because I got depressed. While I took the year off, I continued talking with her and she helped me rebuild my confidence,” explained Rachel.

“Nutrition also changed as I had to be in a liquid diet for three weeks to regain the weight I had lost. When I felt healthy enough, I would run with my dad and trained privately with a trainer I knew for a long time.”

Meanwhile the Tar Heels were starting in a new season as defending champions en route to repeat in 2009. The inability to not be able to play might be one of the hardest things to cope with. In Rachel’s case it wasn’t quite the same, as she honestly puts it.

“With the illness, I was so sick that I couldn’t even think about soccer,” said Rachel.

But with time as UNC was inching into another championship, Rachel was also inching herself back to full recovery. 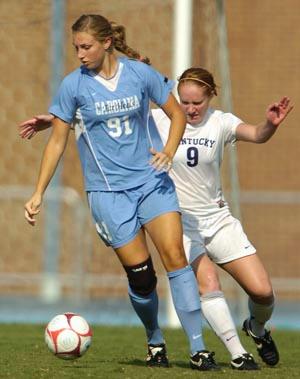 Rachel Wood competes.
“I had planned to see the girls at the College Cup, but I had some setbacks, and I couldn’t go. It was sad to know that I couldn’t be there in person, but I was really happy for the girls.”

Eventually, that little bug started to creep into Rachel. A natural sign, one would say, to a gleaming future – but maybe still with a little doubt.

“By the spring of 2009, I was getting antsy to come back, and it felt nice that I didn’t feel any pressure about my performance,” explained Rachel. “But even by May, there was no certainty that I was coming back.”

Today, just a few months removed from doubt and certainty, Rachel Wood is back in North Carolina, back on the team, and back in the starting 11. After a fantastic summer, she felt great, once again joining her squad – a little more carefully of course.

“The coaching staff has been unbelievably supportive,” Rachel said. “Everything has been highly monitored since I am susceptible to infections and viruses. So when I am not feeling well or have some scratch, the staff has been taking care of me very well.”

But things are not without some difficulty.

“For example, we just came back from some games in California and I have been exhausted and fatigued, and just trying to get my body fully hydrated again,” Rachel said. “In the summer, I got so dehydrated that I needed an IV on two or three separate occasions, but it’s been better with the cooler weather.”

Now with the college season in full swing, Rachel has performed admirably. She has started every game and already notched two assists, proving to everyone that she is in full form.

“Everyone is just as much in shock as I am. Nobody thought I was going to perform that well,” Rachel said. “Almost every day Coach Dorrance tells me that he is glad I am back. Everybody is genuinely happy that I’ve come back.”

However the former forward turned midfielder turned center back has also needed to adjust to her new position.

“I am playing center back, which I have never done before. I need to learn the defensive system and perfect it, but it makes me a little nervous because unlike a forward or a midfielder, we are it.”

Some may say Rachel is it. The epitome of someone never giving up, fighting tooth and nail to not let obstacles in one’s life prevent them from doing what one loves.

But Rachel takes it in stride.

“I just want to have fun and take this experience for what it’s worth,” she said. “I realize now I got a second chance, and I will not take it for granted. I really get to see this for what it is in an amazing time of my life. I want to play soccer and get my degree, and if all works out, play professionally in the U.S. or overseas.

“As an athlete you sometimes think you are invincible, this was definitely a humbling experience.”