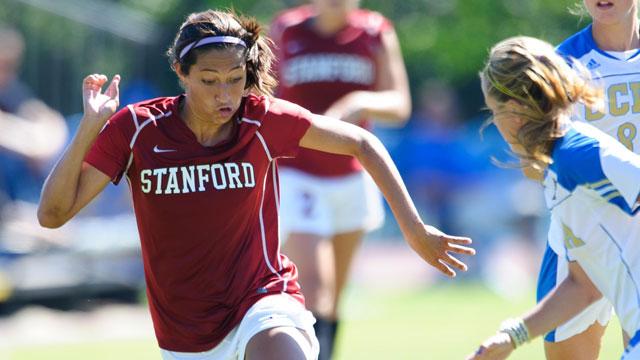 Stanford continues to cruise along at the top of the TopDrawerSoccer.com Women’s Tournament 64 National Ranking. The Cardinal remained the only undefeated team in women’s DI college soccer with a shutout win vs. California. Paul Ratcliffe’s squad now stands at 16-0-2 overall and 7-0-0 in the Pac-10.

From last week’s top 10, only Boston College falls out, with Virginia moving back into the top 10. 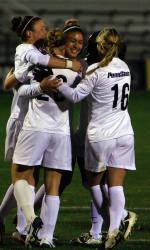 Tani Costa (center) is congratulated after scoring a hat trick.
The Tournament 64 National Ranking is a running effort to project the 64-team NCAA Tournament field, including all automatic conference and at-large bids to the field. It is updated every Monday through the season. You can see the entire ranking here.

The ranking now beings to crystallize in terms of the RPI and especially the automatic vs. at-large bids as they begin to take shape with the end of regular season and the beginning of conference tournament play in many leagues.

The full TopDrawerSoccer.com Women's Team of the Week for Monday Oct. 25 through Sunday, Oct. 31 is as follows.

The TopDrawerSoccer.com Team of the Week is chosen after consulting match reports from all DI matches played in the preceding week.