This his part 1 in a 2-part series about Scott Miller's decision to forgo his final season due to head injuries.

Focus on concussions in college and professional sports has increased in the past decade, particularly the understanding of long-term effects. The Marquette University men's soccer program is all too familiar with concussions.

Central defender Scott Miller, a two-time captain, received two concussions in spring play within nine days, and following serious symptoms and the inability to play in the following fall season, decided not to return to collegiate soccer competition.

Miller, who will graduate with a double major in finance and marketing this May, has at least one year of NCAA eligibility remaining with an appeal possible for a second season. Yet the Jefferson City, Mo., native won't be taking the field again for the Golden Eagles following a concussion-ridden spring season. 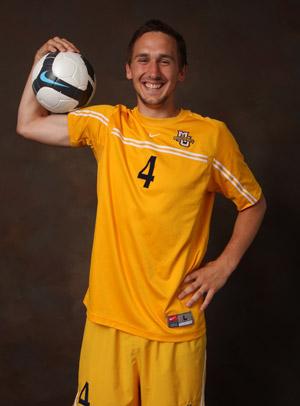 Scott Miller
His career has been one of forced ups and downs due to injury. After being named Newcomer of the Year as a freshman in 2007, the sweeper returned from a knee injury early in his sophomore season only to miss the remainder of the 2008 campaign with an emergency appendectomy. Miller emerged as a team leader as a junior, finishing first in minutes played, before his career-ending spring season.

In April 2010, Miller collided with a goalkeeper against Northern Illinois(m), leaving him with a broken nose and concussion. Though Miller experienced symptoms of the concussion, he decided not to tell the team medical staff or coaches, and was cleared to play ten days later against Milwaukee(m) in the Wisconsin Cup.

"That was the biggest mistake of my career at Marquette," Miller said of his decision to play against UWM. "I told the team doctor and coaches that I felt normal and would be ready to play. Going into the game against UWM, I did not feel well but decided to play. It was one decision that if I had done differently probably would have saved my career."

In the match, Miller continued his dominance in the air from the back line, heading balls during the first half, but was visibly dazed at halftime. As he was sitting on the bench, he felt extremely nauseous and had severe headaches.

His injury against Milwaukee(m) was the effect of second-impact syndrome which occurs when an athlete sustains a second concussion before symptoms from an earlier concussion have lessened.

Following his second concussion in less than two weeks, and the third of his career, Miller was immediately sidelined, evaluated and treated. His symptoms ranged from nausea and headaches to loss of appetite and exhaustion. Miller was put into a dark room with minimal stimuli for two weeks to allow his brain to properly rest and could not return to physical activity until the fall season.

Team medical staff used diagnostic and assessment tools including the SCAT2, an evaluation method developed at the International Consensus meeting on Concussion in Sport and endorsed by FIFA and the International Olympic Committee. Miller was also evaluated by Dr. Michael McCrea, one of the world's leading neuropsychologists specializing in concussions as the Director of ProHealth Care's Neuroscience Center and Research Institute in Waukesha, Wis.

Dealing with the aftermath of a serious concussion is a collaborative effort between the student-athlete, coaches, medical staff and academic support staff. Miller, one of 11 MU players named to the 2009-10 BIG EAST All-Academic Team, was unable to take spring finals and could not work full days at the beginning of his summer finance and marketing internship.

"Our physicians are very adamant about managing concussions properly and provide documentation and information to the professors that get routed through our academic support," said Assistant Athletic Trainer Lauren Boyler. "Because Scott is such a great student and has a great reputation with his professors, they were very accommodating to work with him through his recovery. A lot of that is a tribute to the student-athlete he was and the work he put in the classroom before his injury."

"Concussions have been something that we minimized several years ago and now as we get more evidence, we've recognized the seriousness of them," said Dr. Carolyn Smith, Team Physician, one of many athletic trainers, physicians and specialists who treated Miller in the days and weeks following his concussions. "Now they're taking that information and trying to be more preventative and proactive, and that's a great thing. We still have a long ways to go in our knowledge base with concussions, but at least we're acknowledging that it exists and that we need to do something and do it better."

Please come back tomorrow for Part 2 and learn the reason why Scott chose not to return.