This his part 2 in a 2-part series about Scott Miller's decision to forgo his final season due to head injuries. Click here to read part 1.

The recent focus on concussions in the media and by professional sports leagues, notably the NFL, has increased the awareness of long-term repercussions by student-athletes. Nearly four months after his spring concussions, Miller watched a video about concussions suffered by a high school football player.

"That video really put things into perspective for me. I realized one more concussion could cause permanent brain damage. As much as I love the game and knowing I would miss it every day, I could not risk my future to return to the field," said Miller.

The decision was an emotional one for Miller, who had the potential to play professionally following his soccer career at Marquette. The support of his family, along with discussions with coaches, team medical staff, teammates and a concussion specialist, led Miller to what he called, "one of the toughest decisions I've ever had to make." 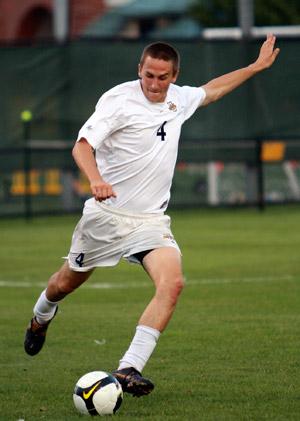 Head Coach Louis Bennett, who led the Golden Eagles to their first ever appearance in the BIG EAST Men's Soccer Championship in 2009 and again in 2010, said the conversation with Miller about his decision, "was one of the most difficult since I've been here."

"We've had some ups and downs in the program, but that was probably one of the most painful conversations we've had. We're still very emotional about it," said Bennett. "I'm sad, but I'm happy that Scott came to this conclusion on his own. I would have loved to have Scott Miller back as captain and as central defender or midfielder - it would have put our team over the top. But there's a point in which you cut off your thirst and quest for winning and consider what's good for the individual and his long-term career. The world is his oyster, and not just in a soccer sense."

The men's soccer program looks to use Miller's concussion experience as a learning opportunity.

"I think Scott can be a great role model in a number of ways, including the importance of reporting," said Dr. Smith. "Soccer is great here and now, but for most people, it's not going to be their livelihood. Using his experience here is going to help him be a good mentor and bring a greater understanding to other athletes that are in a similar position."

Miller directly mentored injured teammates, using his own situation to educate and remind others about the dangers of returning to play too quickly.

"Scott has been more of an advocate to his teammates when they are in the situation to say, 'Just sit this one out, it will be a much shorter recovery time.' He doesn't want his close friends and teammates to experience what he did. It takes an extremely intelligent and strong individual to want to make an example of themselves in a situation like this to try to make it better for those around them," said Boyler.

Miller's impact on the Marquette soccer program, which improved significantly during his career, will be remembered by Bennett and others in the program.

"Scott has been irreplaceable in establishing the culture. My job when I came here in 2006 was to have a winning culture of school, soccer and social within the program," said Bennett. "The minute Scott stepped on campus, we knew he could be the standard. There's never been anyone who works harder in the therapy room to get on the field, and there's never been anyone who has worked harder on the field up to this point. We've had to scour the world to find someone who might be able to do some of the things that he can do."

Miller concludes his soccer career at Marquette with 34 games played and a 2009 NSCAA Wisconsin All-State Team honor. He was selected as MU's Newcomer of the Year following a freshman season in which he made 14 starts and was third on the team with two goals. As a junior in 2009, he started and played in 17 of the team's 18 matches and led the squad with 1,629 minutes played.

His legacy will remain in the program, from his leadership on the field to his influence off the turf. Though his decision took eight months to make, Miller still believes, "it was the right decision for me."